You have permission to edit this article.
Edit
Home
News
Sports
A & E
Business
Obituaries
Multimedia
Announcements
Classifieds
1 of 5 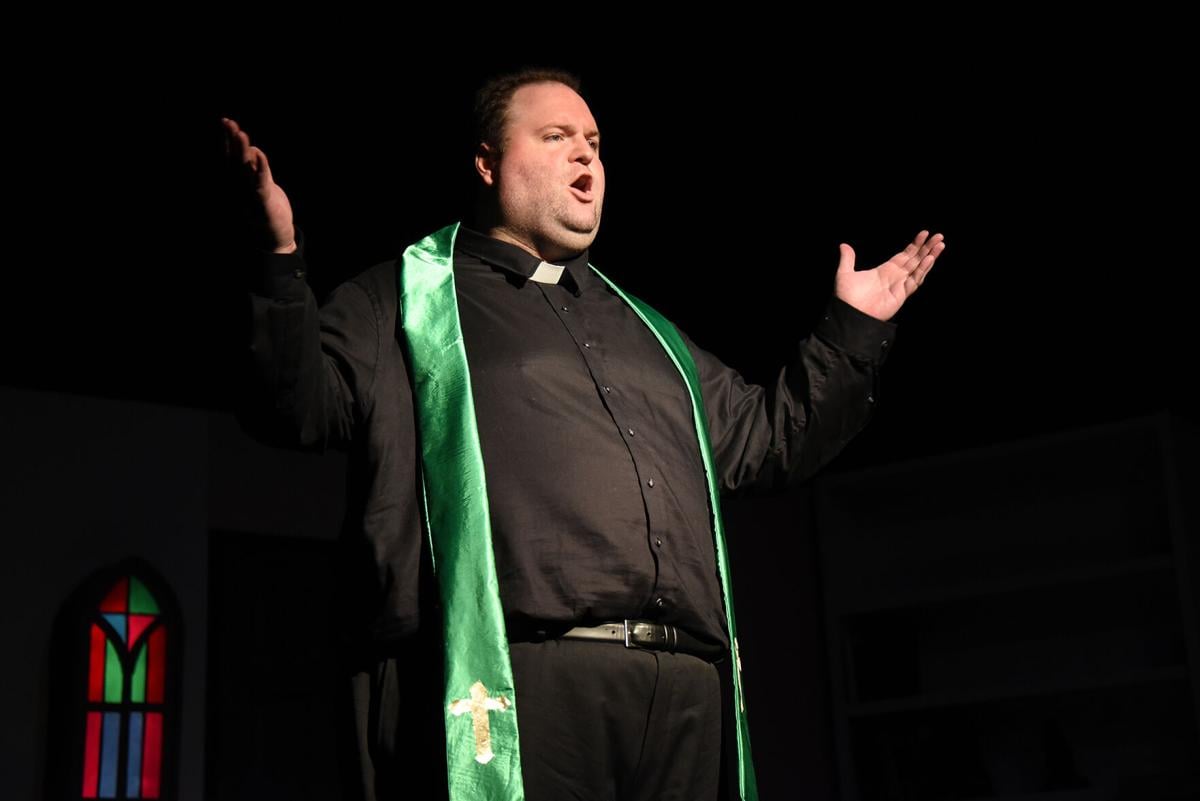 Father Flynn, played by Casey Long, delivers a sermon in ‘Doubt: A Parable’ during a rehearsal on Sept. 16. The play, which is being presented by the Twin City Theatre Company at the Monticello Theatre Association, continues Friday through Sunday. 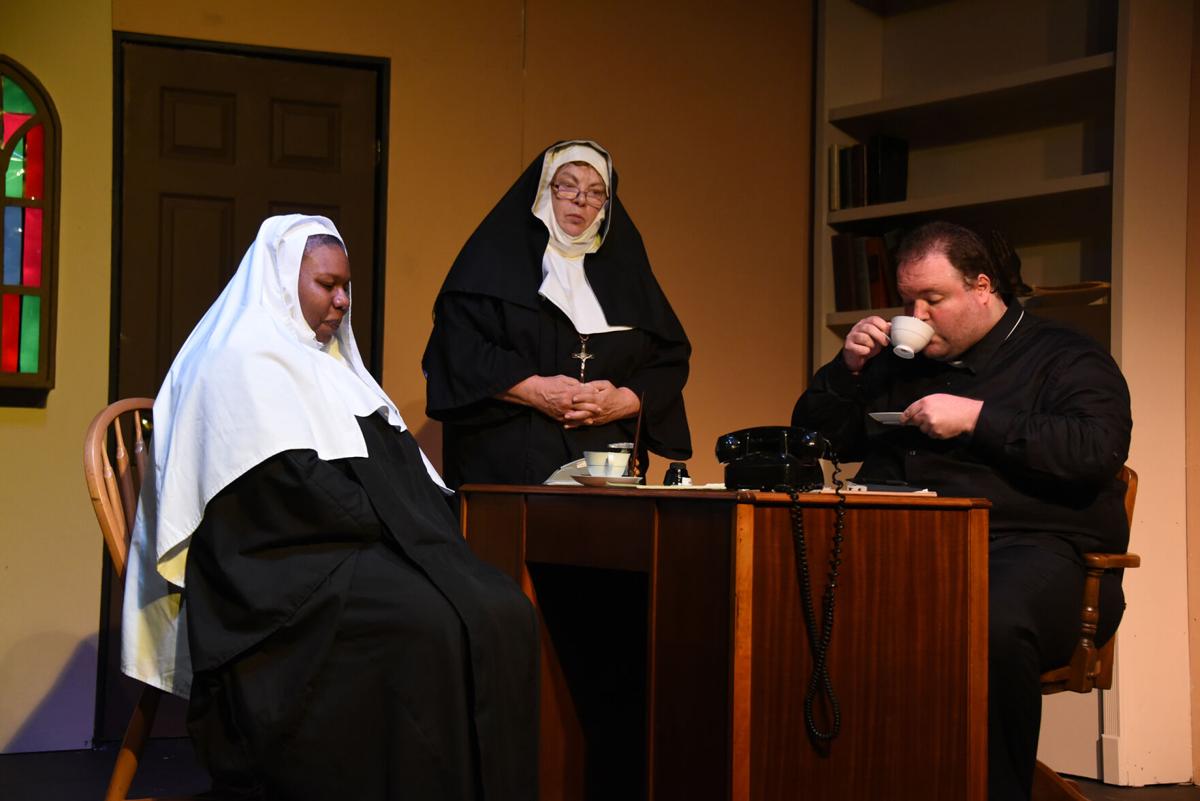 Sister James (played by Misty Martin), Sister Aloysius (Diane Pritchard) and Father Flynn (Casey Long) have a meeting during a Sept. 16 rehearsal of ‘Doubt: A Parable,’ being presented by the Twin City Theatre Co. at the Monticello Theatre Association. 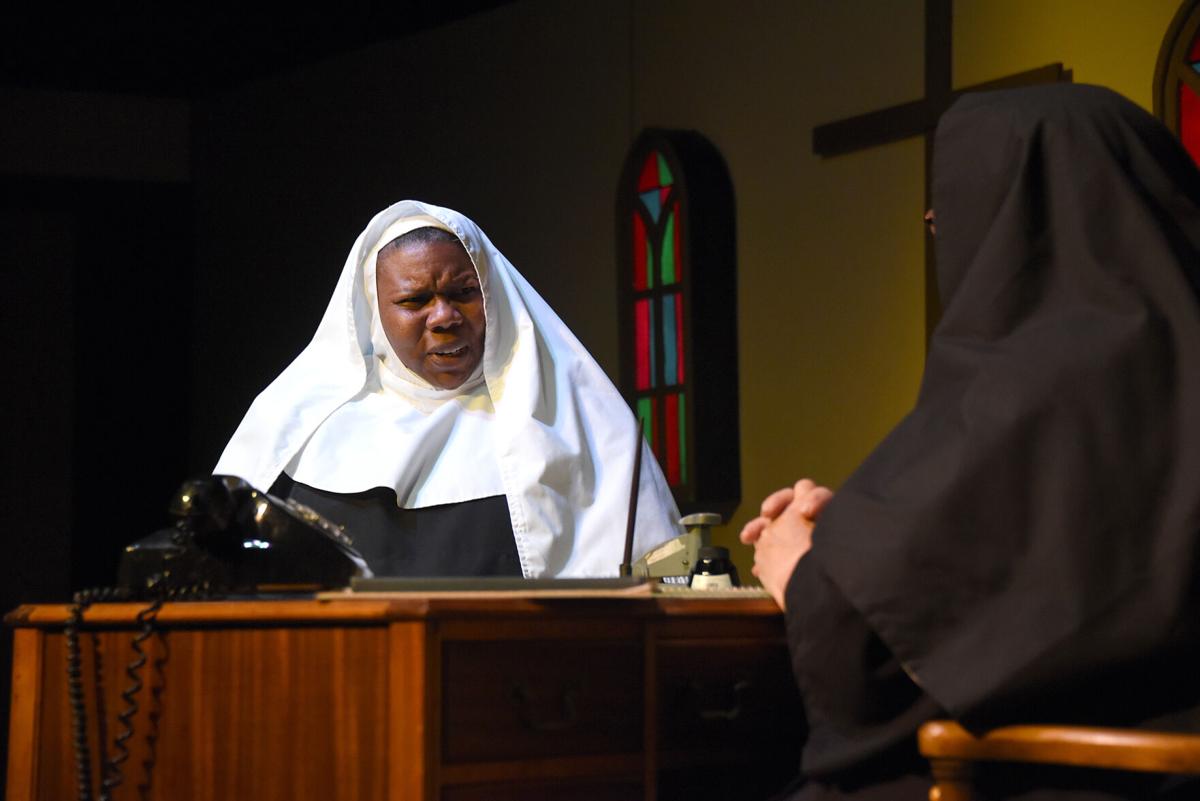 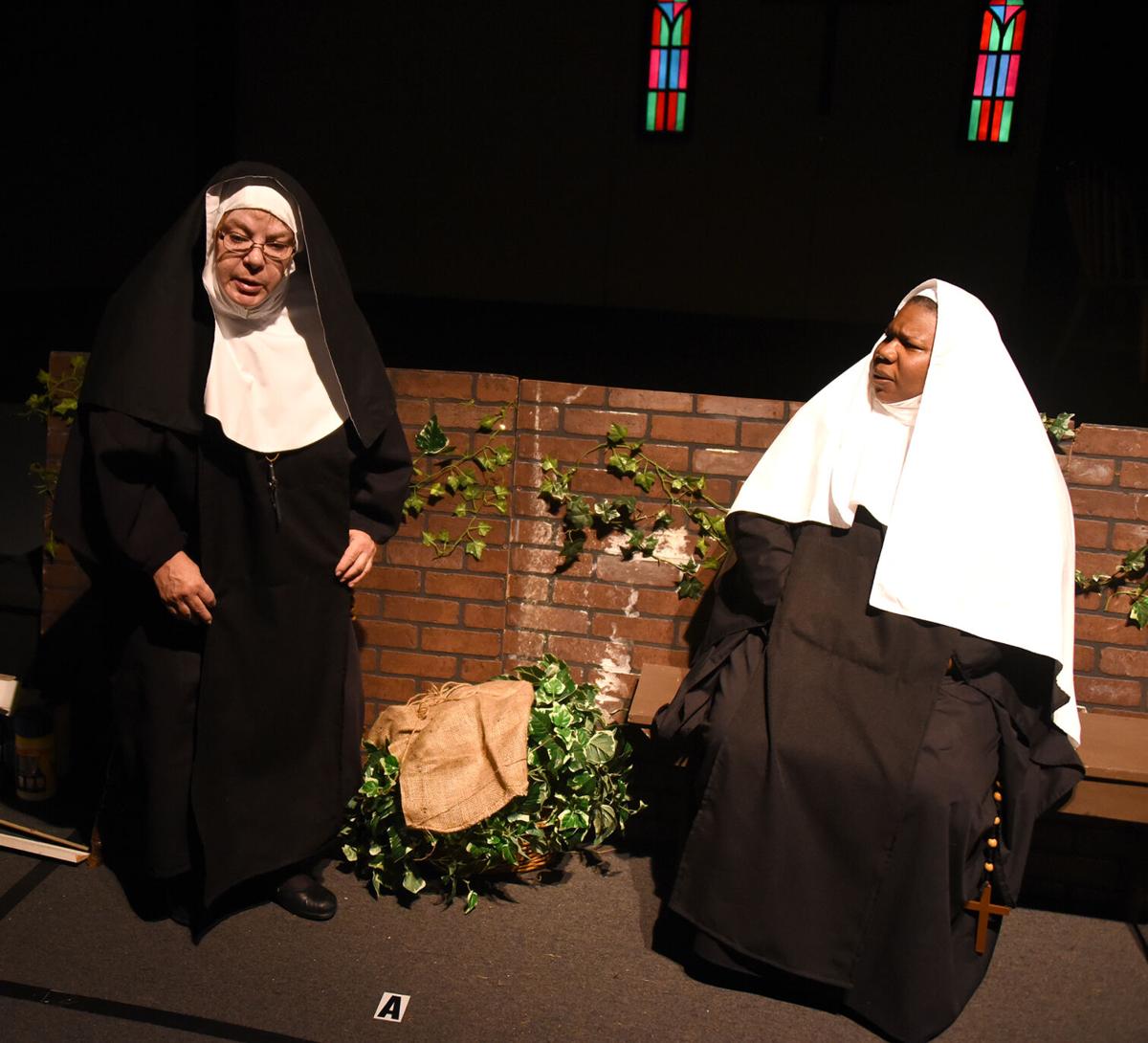 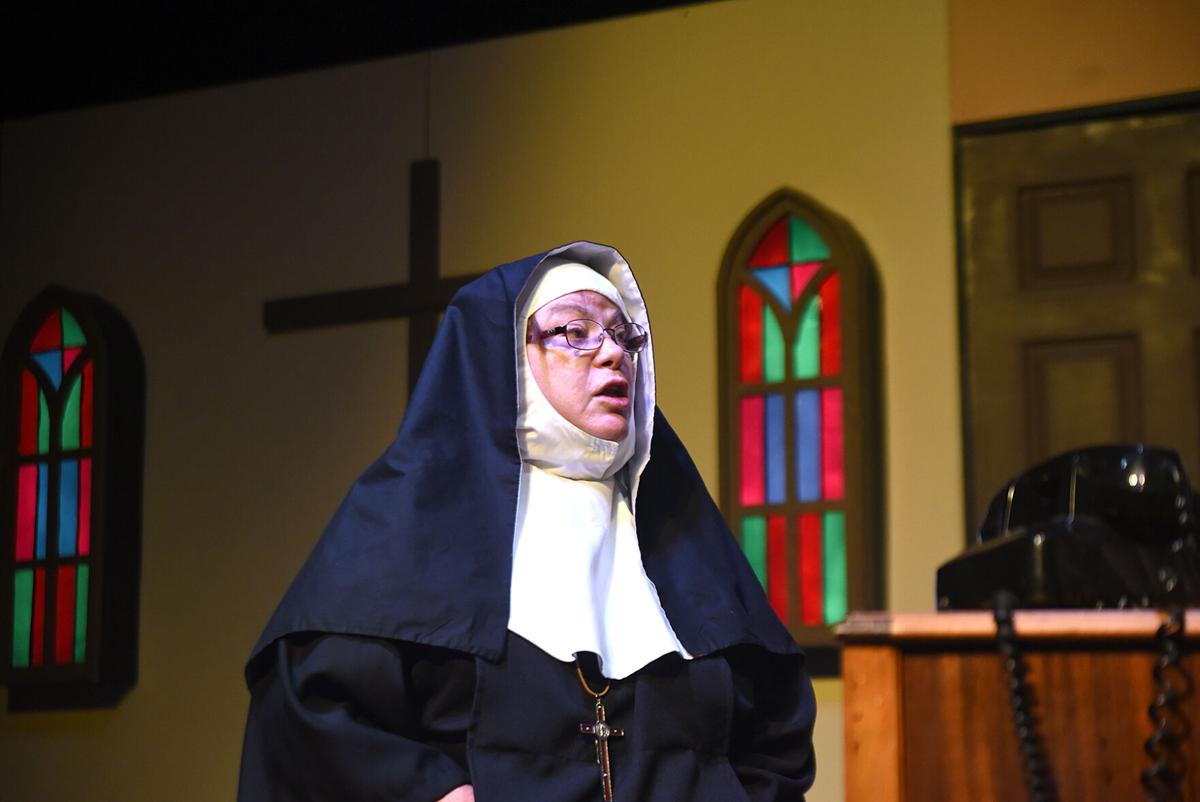 Father Flynn, played by Casey Long, delivers a sermon in ‘Doubt: A Parable’ during a rehearsal on Sept. 16. The play, which is being presented by the Twin City Theatre Company at the Monticello Theatre Association, continues Friday through Sunday.

Sister James (played by Misty Martin), Sister Aloysius (Diane Pritchard) and Father Flynn (Casey Long) have a meeting during a Sept. 16 rehearsal of ‘Doubt: A Parable,’ being presented by the Twin City Theatre Co. at the Monticello Theatre Association.

MONTICELLO — It has been 20 long months since Twin City Theatre Company’s production of “Bus Stop” played at the old SoDo Theatre in downtown Champaign. That flexible former theater space has been converted to a business where people hurl sharp objects while enjoying various beverages.

As the coronavirus pandemic spread in early 2020, Twin City had planned a production of John Patrick Shanley’s 2005 Pulitzer Prize-winning play, “Doubt.” With its opening this past Saturday night at Monticello Theatre Association’s performance space just 25 minutes from downtown Champaign, Twin City demonstrates that it is back in business and hungry for an audience.

Requiring masks for attendees whatever your vaccination status, the airy space inside the Monticello theater allows the company to manage social distancing for individuals, couples and groups. This is the new normal, for now, and Twin City deserves credit for its approach.

“Doubt” is a compelling title for Shanley’s play because its narrative pits the righteous certitude of an elderly Catholic nun against the charismatic appeal of a young priest who argues for “love” and for a modern approach to relations with their congregation.

Speaking in 1964, months after the assassination of President Kennedy, Father Flynn (Casey Long) is inspired by reforms enacted through the Second Vatican Council.

The priest also crafts homilies based on observations he makes regarding the severe behavior of Sister Aloysius (Diane Pritchard). Her reasons for rejecting a familiar Christmas song are sure to amuse — as long as the theater’s air conditioning does not pick that moment to drown the actors’ voices.

Indeed, in a play that wrestles so strenuously with the truth (or should that be The Truth?), there is an underpinning of humor that fully humanizes the characters.

Sister Aloysius recruits a young, enthusiastic Sister James (Misty Martin) to watch for untoward behavior from her eighth-grade class and suggests the “innocent” sister be wary of Father Flynn’s charms. It is not Sister James’ innocence, however, that worries Sister Aloysius. It is the priest’s hold on the minds and imaginations of the schoolboys he coaches.

We have all heard enough, by now, about crimes against children by a range of people — including Catholic priests — so that we instantly get a sense of what may unfold. But we may be fooling ourselves; we may be too certain.

Perhaps the elder nun’s suspicion is due to being emotionally locked in the past, resistant to the forces of change needed to bring the church into the modern era.

Could it be that the young Black boy, with whom Sister Aloysius thinks the priest has an improper relationship, is merely receiving needed guidance from a male authority figure? Our experience in contemporary America makes us suspicious, but Father Flynn offers a strong case for how and why he is protecting Donald, who does not appear as a character in the play.

Likewise, Donald’s mother, Mrs. Muller (J’Lyn Hope), wants only for her son to graduate safely from middle school, and for Donald to survive the savage beatings he receives from his father for being a sensitive soul. She tells Sister Aloysius, in no uncertain terms, that the man who is good to her son — Father Flynn — will receive her unconditional support.

The scene between Hope and Pritchard is poignant in the way it challenges us to rethink what “privilege” means, what we might do about it moving forward, and it does so without even mentioning that word.

It should be noted that The News-Gazette visited the production at a dress rehearsal prior to opening night. As director Alexis Jordan Webb’s thoughtful production continues to grow, certain technical challenges will surely be resolved. Having a full audience of living, masked people will help the actors connect more fully and, at times, with more subtlety.

Here’s hoping that the costumes continue to evolve to provide a more open type of wimple for the nun’s habits. The current configuration restricts the facial expressions and movement of the talented Pritchard and Martin.

Now that Twin City has abandoned its postage-stamp stage at the former SoDo Theatre, it will be fascinating to see how the company designs for a larger, fuller stage. The current production is nearly compact enough to have been done on that smaller stage.

As the search continues for Twin City’s more permanent home, our community should recognize the accomplishment of getting “Doubt” produced. It is an important work and truly timely. Who among us, especially at this moment in our culture, is not certain that we know “the truth”? The subtitle of the play — “A Parable” — reminds us that stories can always help us learn and grow.

Shanley’s play forces us to think about our attitudes, our doubts, our certainties. It is the right play for right now.

Jeffrey Eric Jenkins is a professor at the University of Illinois and president of the International Association of Theatre Critics. jej@illinois.edu Twitter: @Crrritic