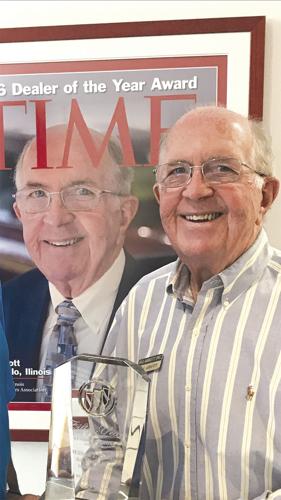 Bill Abbott poses with his Time Magazine Dealer of the Year Award in 2016.

The original Bill Abbott dealership is pictured here, on the location where the current McDonald’s now sits.

Bill Abbott poses with his Time Magazine Dealer of the Year Award in 2016.

The original Bill Abbott dealership is pictured here, on the location where the current McDonald’s now sits.

As the sun sets on Bill Abbott’s 53-year tenure as owner of a local automobile dealership in Monticello, area leaders are expressing appreciation to him for not only running a thriving business for more than five decades, but for being an important community partner.

It was announced last week that Abbott’s Buick, Chevrolet, Chrysler, Dodge, Jeep and Ram dealer would sell to cross-town dealership Rick Ridings. The deal should be complete in early 2021.

The impact from Abbott’s has included an investment of more than $85,000 through the years in local schools. That includes the donation of scoreboards for all Monticello gyms except the recently-completed Sievers Center.

“Through the years, Bill Abbott, Inc. has shown so many other businesses how important it is to be active and involved in the community, and how to operate their business fairly and competitively,” said Monticello Chamber of Commerce Director Shelly Crawford-Stock.

“During that time, they have supported countless organizations and events through the years. They have sold people their first cars, fixed them when they got into accidents, then sold them their first new cars. To say that they are a part of the fabric of our community is an understatement. We will miss their consistent support of organizations throughout town even though we know it will continue through Rick Ridings,” she added.

Bill Abbott’s enterprise has been open in seven different decades, starting where the current McDonald’s stands, and now encompasses its familiar location at 500 W. Center St. as one drives into the community.

It is unusual to own any business for 50-plus years, much less a car dealership that had to withstand interest rates near 20 percent in the 70s and the recession of 2008.

Abbott says the secret to his success is simple.

One of his biggest fans is Ridings, a car dealer in Monticello since 1996.

“He’s a special car guy,” said Ridings. “The big story here is a local dealer was there with the same ownership for 53 years. If you think about all the employees he’s had through the years, provided jobs for so they could raise their families, buy homes, send their kids to college.”

Abbott is a Piatt County native, graduating from Mansfield High School in 1955, going on to earn a bachelor’s degree in industrial administration from the University of Illinois. After a two-year stint in the U.S. Army, he started working as the car dealership business manager at Buchanan Buick.

After leaving for three years to work for the Buick Division in Chicago as a district manager, his local roots came calling.

“Mr. Buchanan called me one night and told me he wanted to retire. He wanted me to be his successor. We worked out a deal,” Abbott said in a 2016 article.

Since then, brands have been added, buildings built, awards won, and local school endeavors funded.

One of those awards was a Time Magazine and Ally Financial Dealer of the Year honor in 2016.

Besides the scoreboards, Abbott’s has also sponsored the annual Holiday Hoopla basketball tournaments since day one, and provided driver’s education cars for the school district. Recreation ball teams have also been funded, and dollars are also funneled to the Kirby Foundation to help the local hospital.

Abbott also has high praise for his general manager, Travis Fox, whom he called hardest working man he has ever known in that 2016 article in the Journal-Republican.

Fox will continue on with Ridings, who promised jobs for all current employees.

“I personally view this as a book. A book has chapters within them, and within those chapters they build on each other with growing anticipation,” said Fox. “The anticipation and excitement is certainly within me.”

City of Monticello Community Development Director Callie Jo McFarland said the span of time the business has operated speaks well for both Bill Abbott’s leadership and the community itself.

“It’s such a great accomplishment for any business to make it that long. This speaks volumes to the strength of the business community in Monticello, as well as Abbott’s,” said McFarland, who is also thrilled that ownership will remain local.

“It’s always exciting to see a legacy continue, even if it doesn’t quite look the same as it did,” she added.

“Our family has alway bought vehicles from the store that Bill bought out and Bill since Pike Ford (downton on East Washington Street) went out of business. It is great to have home town dealers who know you and your vehicles and want to retain your business through good service,” said Sievers.

Ridings said Abbott has also fought for the rights of dealers through his leadership on the board of state and national organizations, including as a chair of the National Auto Dealership Board.

A written statement about the sale added that “Bill thanks his loyal employees and customers for the opportunity to have been a car dealer for 53 years. He wished the best for Rick Ridings and his team.”