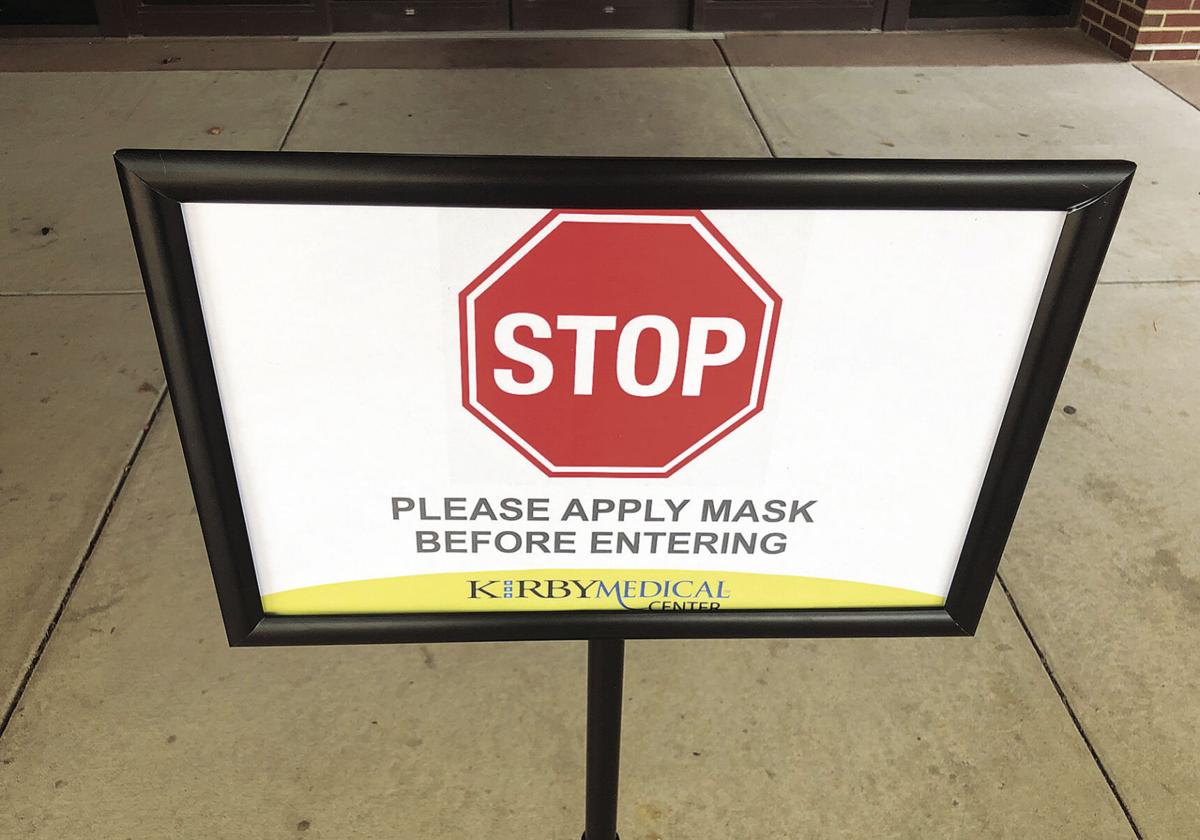 Signs such as these were common in 2020.

About 60 people turned out for a Piatt County zoning board meeting to discuss the wind energy conversion ordinance in January. 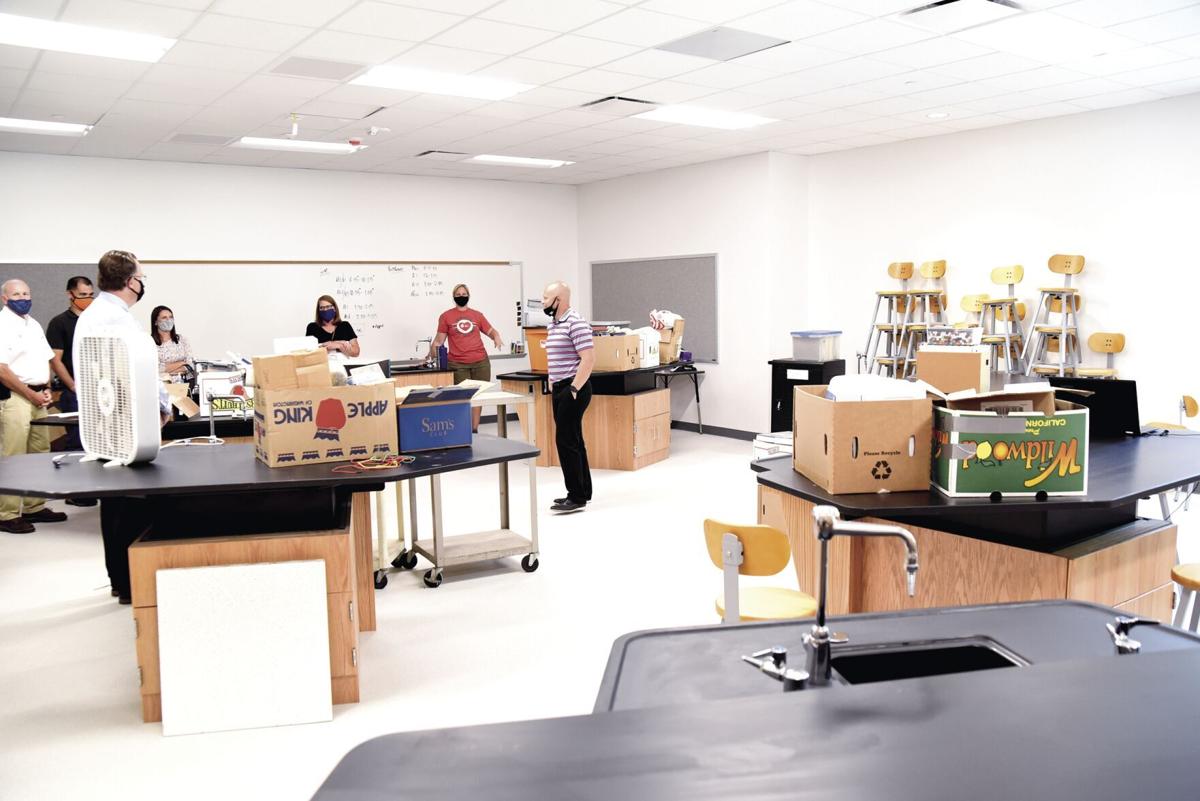 Monticello Chamber of Commerce members tour one of the new science labs at Monticello High School.

Signs such as these were common in 2020.

About 60 people turned out for a Piatt County zoning board meeting to discuss the wind energy conversion ordinance in January.

Monticello Chamber of Commerce members tour one of the new science labs at Monticello High School.

(Check back for more stories about 2020 throughout January)

The coronavirus pandemic officially reached Piatt County in April, but effects were seen a month earlier when state-ordered business shutdowns took effect. By the end of the year, the county death total from COVID-19 was at seven, schools shifted between remote and in-person learning – many more than once – and the virus affected all ways of life in the county.

Good news at the end of they year was that a vaccine had arrived and was being administered to frontline health workers in Piatt County.

1A. Perseverance amid a pandemic

The county was down but not out after the COVID-19 pandemic hit in the spring. Schools adjusted in the fall, implementing guidelines for student and staff safety, along with allowing options for families to continue learning remotely if they wished.

With indoor dining banned by the state in March and again in November, Monticello’s Chamber of Commerce started an Eat Around Monticello Facebook site to help with curbside and pickup options. The City of Monticello also used “parklets” to expand outdoor dining options downtown.

People came through in other ways as well. Anonymous donors gave $8,500 to the Monticello school district to help families in need, and volunteers made masks for health workers when there was a shortage.

2. Rough start to the year for the county board

2020 started for Piatt County with its county board chairman indicted by a grand jury and an increasing deficit in its main operating fund, and ended with those charges against Ray Spencer dropped and the board adopting a balanced budget.

In between those times, the board battled with its Emergency Management Agency director, who has not been on the job since August; and made progress on approving changes to its Wind Energy Conversion ordinance.

Other legal action against the board – both from its own state’s attorney office – was a complaint that led to more dollars for the EMA, and another claiming an Open Meetings Act violation.

When school buildings were shut down in March, it allowed construction work to pick up steam at Monticello High School and Washington Elementary School. It helped move the $35 million effort along so much that school officials anticipate it being declared substantially complete in March – six months ahead of schedule.

The project was also beating its budget by about $1 million as of the end of 2020.

Work has included a new high school science wing, gymnasium, and 14-classroom addition at Washington Elementary School. Extensive renovations at both schools have also been undertaken.

4. Charges filed, then dropped against county board chairman

A grand jury delivered forgery and official misconduct indictments in January against Piatt County Board Chairman Ray Spencer. The indictment claimed Spencer deleted a portion of a memorandum sent by the Piatt County state’s attorney and delivered it to a news media outlet, and that he also attempted to hire outside legal counsel without the permission of then-state’s attorney Dana Rhoades.

The charges were dropped in December after a special prosecutor agreed criminal intent could not be proven.

Federal authorities in November officially charged former Bement School Superintendent Daniel Brue with four cases of wire fraud. He had been investigated since the summer of 2019 for allegedly stealing $75,000 from the Bement school district when he was superintendent there from 2011 and 2013, and $225,000 from the Meridian district, where he served in the same capacity from 2013 until resigning in June of 2019.

Earlier in 2020, the Bement school board accepted an agreement for Brue to pay $20,000 to the district. He had filed for bankruptcy late in 2019.

After seeing recommendations sent back to it by the county board for further review, the Piatt County zoning board of appeals eventually approved amendments to its wind energy conversion ordinance regarding setbacks (1.3 times tower tip height), allowable noise (by following state standards), tower tip height (maximum of 625 feet) and shadow flicker (impacts of no more than 15 hours per year).

The county board has ratified the recommendations on setbacks and noise, and will address tip height and shadow flicker on Jan. 13.

7. Abbott’s dealership to sell after 50-plus years in Monticello

It was announced that Rick Ridings, Inc. would purchase the Bill Abbott, Inc. car dealership in Monticello. The sale should be complete early in 2021, with the new owner saying all existing staff would be offered employment.

The Journal-Republican printed articles about Abbott’s 53-year history as a car dealer in Monticello, and about the rise of Ridings in the area.

Despite there being less sports than usual due to the pandemic, Piatt County athletes performed admirably. Monticello High School cross country runner Mabry Bruhn was named the News-Gazette

Girls Cross County Athlete of the Year, while her coach David Remmert netted N-G Coach of the Year honors.

An Illinois appeals court upheld the 2017 murder conviction of Gregory J. Houser, who was found guilty and sentenced to 55 years in prison for the 1990 murder of his estranged wife Sheryl Houser in their rural Mansfield home.

Despite one of the worst years for businesses since the 2008 recession, entrepreneurs still took on new business efforts in Piatt County in 2020.