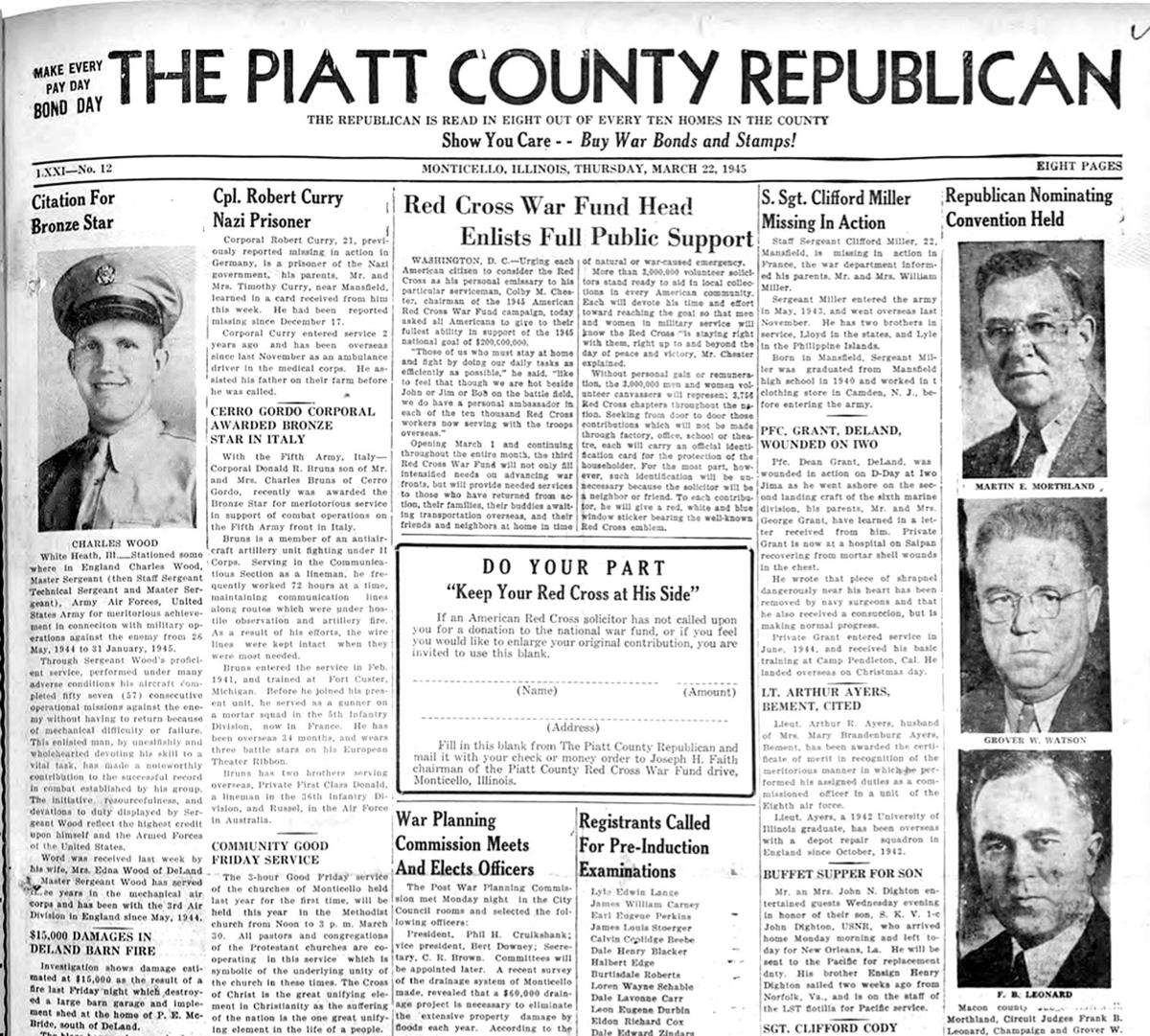 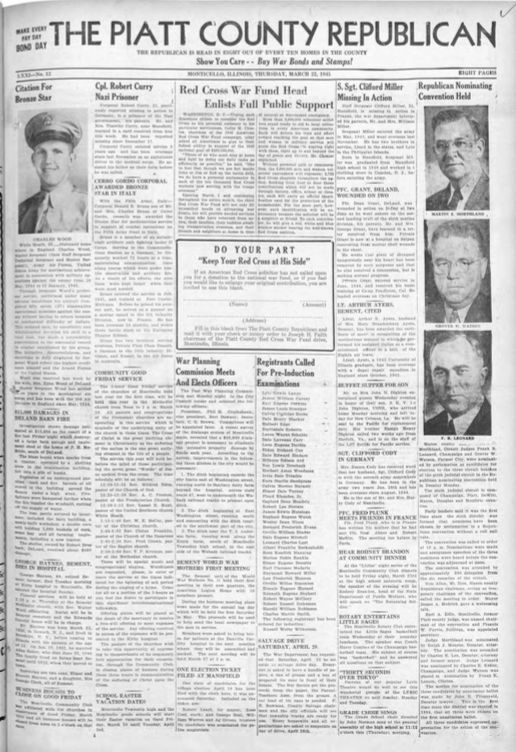 (Compiled by the Piatt County Historical and Genealogical Society)

Excavation work continues to trench Camp Creek in order to extend Monticello water and sewer lines north of the city. Phase I will be completed soon when the lines extend to the north side of Camp Creek Playhouse. Phase II will extend the lines to Regal Crown and a third phase will eventually bore the interstate to reach the area of Strohl Ford. Justin Houdeshell and Brian McIntosh, of Monticello’s Boy Scout troop 122, received their Eagle Scout awards in a ceremony at the Piatt County Courthouse.

Mica Lerner of Monticello, a senior at Monticello High School, has been selected as a semi-finalist in the annual essay contest of the Illinois Editors’ Traffic Safety Seminar. Lerner’s essay was chosen from more than 1,300 entries and is one of 167 to compete for scholarships up to $2,000.

The grand opening of The Attic Shop at 104 S. Charter in Monticello will be on March 25. The Attic Shop offers quality used furniture, appliances, household items, crafts, pictures, pottery and more.

Craig and Becky Webb, owners of the store since 1987, said that a long, hard look at retail trends dictated the move. Seventh and eighth grade students on the Scholastic Bowl team from Washington School in Monticello won the Little Okaw Conference championship on Monday, March 20, then went on to win the IESA Scholastic Bowl Regional on Wednesday, March 22.

The Brown Bag Deli in Monticello is serving as a drop-off site for used records, CDs and tapes to support a special fundraising project for public radio station WILL FM 90.9. WILL plans to sell the donated items during Vintage Vinyl, its third annual used record sale. Last year’s sale of more than 30,000 records raised $22,706 for the station. All proceeds from the sale will benefit WILL’s 1995-96 operating budget. Kay Lust of Bement has been awarded first place in the Capture Illinois Photography Contest, sponsored by the Illinois Bureau of Tourism and Midwest Living magazine. Lust captured first place in the Illinois Heritage category.

For the second time in little over a month, two burglars were apprehended in the McKinley IGA store in Cisco. At approximately 10 p.m. Saturday, store owner, Don McKinley, discovered the burglary in progress. He notified the Piatt County Sheriff’s Department and units from the sheriff’s department, Monticello, Bement and Cerro Gordo City Police Departments were on the scene. Tom Edwards fired a round from a shotgun through a side door causing the two men to seek refuge in a walk-in cooler. A pistol shot by a Piatt County Deputy brought immediate surrender from the would-be thieves.

Tickets for the DeLand-Weldon Alumni banquet on April 4 are now on sale at the DeLand State Bank, Weldon State Bank or from Mrs. Richard Looney in DeLand or Mrs. Howard Poff in Weldon. Tickets are $3.00 per person for the banquet and dance. The banquet will be held at 6:30 p.m. in the DeLand-Weldon High School Gym.

Cpl. Robert Curry, 21, Mansfield, previously reported as missing in action is a prisoner of the Nazi government. Staff Sgt. Clifford Miller, Mansfield, is missing in action in France. PFC Dean Grant, DeLand, was wounded in action on D-Day on Iwo Jima. Pvt. Grant is in a hospital on Saipan recovering from mortar shell wounds to the chest. Master Sgt. Charles Wood received a citation for a bronze star for meritorious achievement in connection with military operations against the enemy from 26 May 1944 to 31 January 1945.

A proposal to consolidate DeLand and 8 school districts of Goose Creek Township into a single district was carried by a wide majority in voting at each of the 9 schools involved. All the schools have been closed except Kentucky and Wisegarver. The schools were Mt. Vernon, Wisegarver, Western, Pleasant Falls, Kentucky, Ashland, DeLand and Harmony.

Frank Cresap purchased the Charles Hazzard building on the west side of the square for his grocery store. The Easter Sunrise Services of the United Brethern Church of White Heath will be held on Tippett’s Hill, 1.2 mile north of White Heath.

The Monticello Rotary Club observed its 21st anniversary at its noon day luncheon. James D. Leiper, who has been in business for the past 38 years has sold his department store on the south side of the square to Emil Fox, factory superintendent of the Tylac Co. Mrs. Rebecca Patterson recently celebrated her 95th birthday. She has a sister, Mrs. Ella Class, of Monticello who is 96. Tech. 4th Grade Leon Gallagher, who has been a prisoner of the Germans since September, 1944, has been released from Stalag Camp 3C. Mr. & Mrs. Allen F. Moore, formerly of Monticello, recently celebrated their 50th anniversary.

Mr. & Mrs. Melvin Hiser of Cerro Gordo, have received word that an airfield in the Philippines has been named “Hiser Field” in honor of their son, Lt. Kenneth Hiser, who was killed in a Japanese strafing raid at the San Pablo Army airfield in the Philippines October 26th. Lodge School was closed this week due to an outbreak of scarlet fever. Homer Wrench, 19, seaman 1st class is on a battleship that fired the first shots in the battle of Iwo and also they shot down several Jap planes. He has 3 brothers in the service – PFC Gilbert, who is with Gen. Clark’s army in Italy, T-5 Clyde, who is in France and PFC Ralph, who is with Patton’s Third Army. Another brother, Harry, received a medical discharge several months ago.

Every home and business should save all of its old paper and rags as well as old rubber, leather, etc., and dispose of them to the school children, Red Cross or other collectors, so that the supply may be kept adequate to meet the demands of the Government and other essential needs.

Pauper claims for Piatt County were reported and were recommended by the committee for payment by the County. Of 138 claims for assistance from 7 townships, the most common were for heating (coal) or medical care. Claims ranged from $.50 for merchandise to $90.00 for merchandise. The total amount of Pauper’s Claims for 1919 came to $2,178.52.

S.M Postlewaite of Bement is making the latest kerosene powered HART-PAR 30 tractor available in Piatt County for $1,395. It weighs in at 5,158 pounds and can pull a 3-bottom plough.

James Marvin, former janitor at the South School building and who has been in the county jail for the past 37 days was taken before W. A. Doss, County Judge, Wednesday afternoon and where he entered a plea of guilty to the following complaints: Giving Liquor to Minors, Giving Cigarettes to Minors and Disorderly Conduct. The Court heard considerable evidence in the cases before pronouncing judgment. Judge Doss fined the defendant $10.00 on the cigarette charge, $25.00 on the liquor charge and $10.00 on the disorderly conduct charge. In default of the payment or securing of these fines and costs, Marvin was returned to jail with con-current sentences.

A High School Band is being organized by the students of the Community High School in Monticello. About 30 have applied for membership. A teacher from the University of Illinois, under the supervision of Professor Erb, is in charge of the class. They will practice twice a week.

Work on the new Township High School is progressing nicely. Rev. R. Ennis preached to two large audiences Sunday at the M. E. church. The Methodist church will hold a big summer revival in a tent commencing July 18. Evangelist E.J. Forsythe of Detroit, Mich., will conduct the meeting. A sunrise prayer meeting will be held Easter morning at the Methodist church.

The Piatt County Athletic and Oratorical contest will be held here on May 14th.

Sixteen applicants for teachers took the examination which was held in the County Superintendent’s office last Friday.