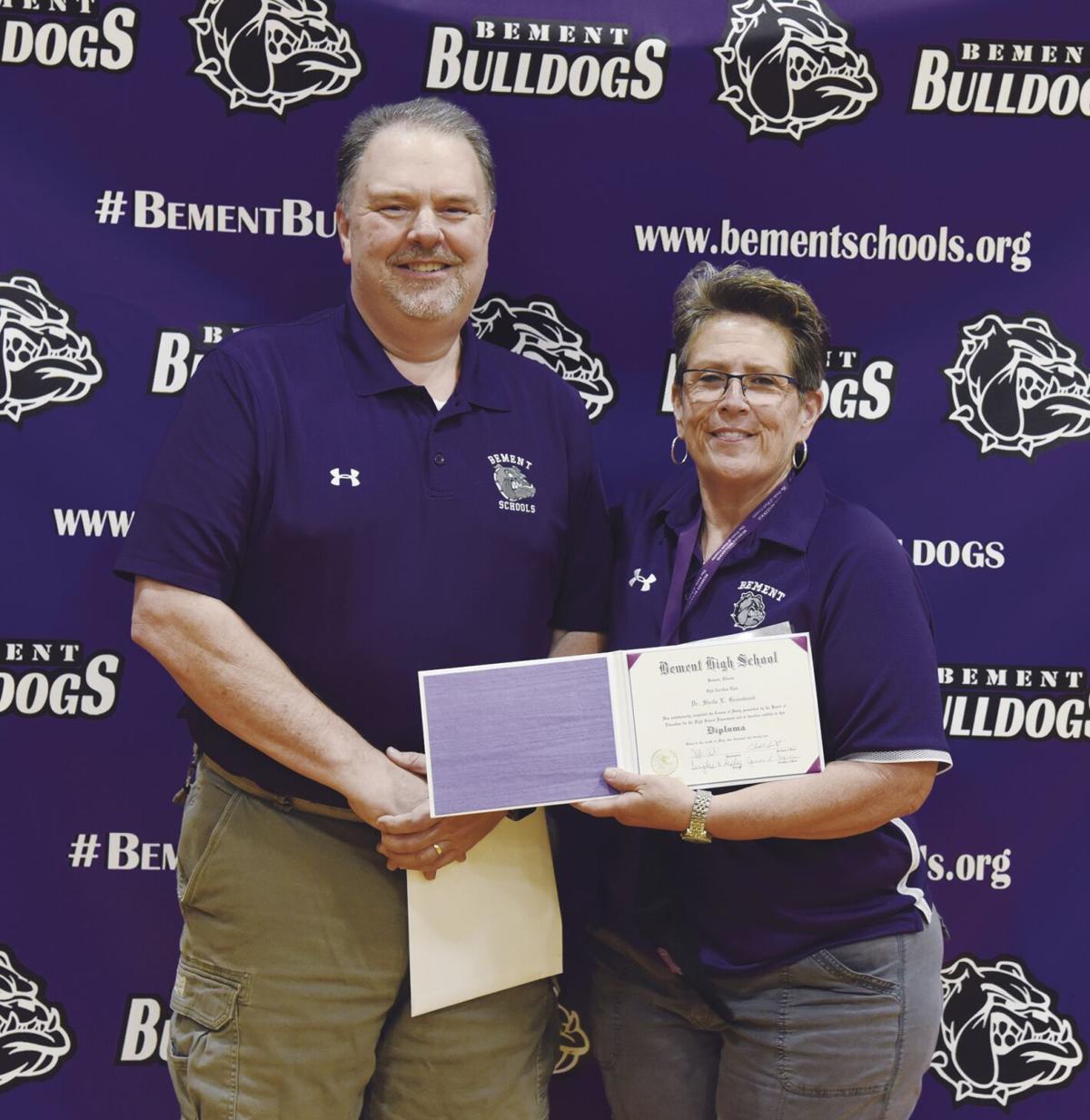 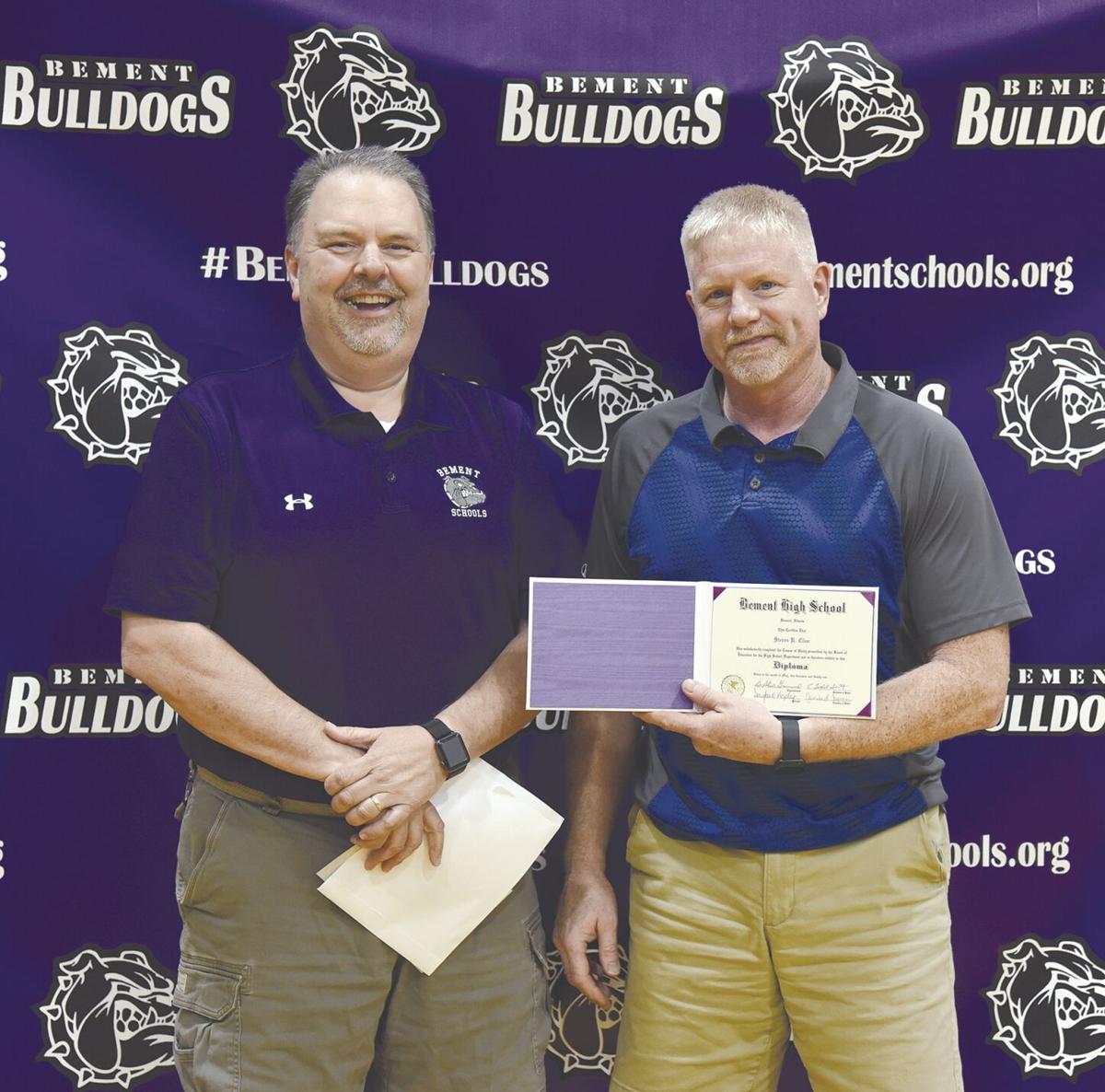 BEMENT — The June meeting of the Bement school board played somewhat like a mid-year Thanksgiving, with appreciation doled out to departing administrators, along with thanks to staff and students for getting the district through the year of COVID-19 without missing any school days due to the pandemic.

Superintendent Sheila Greenwood — who is retiring at the end of the month — was glad to see restrictions ease enough to allow some maskless outdoor celebrations to end the school year.

“That last day when we had activities, it was just the best day, even though it was bittersweet for me.”

Greenwood and retiring assistant Principal/Athletic Director Steve Cline were given honorary diplomas and served cake after the meeting.

Cline expressed gratitude for his four years at Bement, saying the time there reinvigorated his passion for education.

“Four years ago I was done. I was out, and I wish I could have come here earlier,” Cline said. “Thank you very much, I appreciate it.”

While she won’t be working in the district to see it, Greenwood anticipates 2021-22 being “one of celebration” for the school district.

“It should be filled with stuff we took for granted that we weren’t able to do this year — field trips and assemblies. Kids working collaboratively. Kids having P.E. class where they can actually handle the same equipment, things like that.”

Bement will hire an interim superintendent in August for next school year, with neighboring DeLand-Weldon school chief Amanda Geary handling that role in July.

“I would like to thank Amanda for doing this for the district. It gives the board time to find the right interim for the 2021-22 school year,” Greenwood said. “A meeting early in August will be held to hire the interim for that position, and (search consultant) Dr. Bill Phillips will begin the search for the next superintendent in August as well.”

Greenwood said she is pleased with building enhancements that have been completed during her nine years as superintendent, with the latest being a boiler replacement to be done this summer. She also pointed to the addition of wireless internet districtwide, new LED lighting, added security for sports fields and better energy-use contracts as facilities accomplishments in recent years.

She is also proud of the STEM lab that was installed, as well as a Chromebooks-for-all effort that has resulted in all students having their own machine to use.

The outgoing administrator also thanked students and staff for their help, especially this school year.

“I’m very proud of the teachers, staff and students as they handled this year like champs,” Greenwood said.

Board members also thanked Greenwood for her fiscal management, taking a financially struggling district and turning it into one that will have sufficient cash reserves as it enters the 2021-22 fiscal year.

“You left it way better than you found it,” board member Denise Strack said.

One administrative replacement is in place. Christy Sweet will be the elementary school principal and athletic director. She was present at the board meeting, commenting that she had moved to Bement and was “excited and ready to go.”

Cline said new middle school uniforms had arrived, but with the wrong color. While “varsity purple” was ordered, what was received was more of a magenta, Greenwood said. The company will replace them, but will need to wait until July when the correct pigment becomes available.

The uniforms are needed as Bement hosts middle school sports beginning this fall under the new cooperative sports agreement with Cerro Gordo.

William (Bill) F. Tracy II and Stephen Rittenhouse have been elected to the Bement High School Hall of Fame, and will be formally honored during the school’s homecoming this fall.

The Hall of Fame Selection Committee recommended the nominees, which were approved by the school board on June 9.