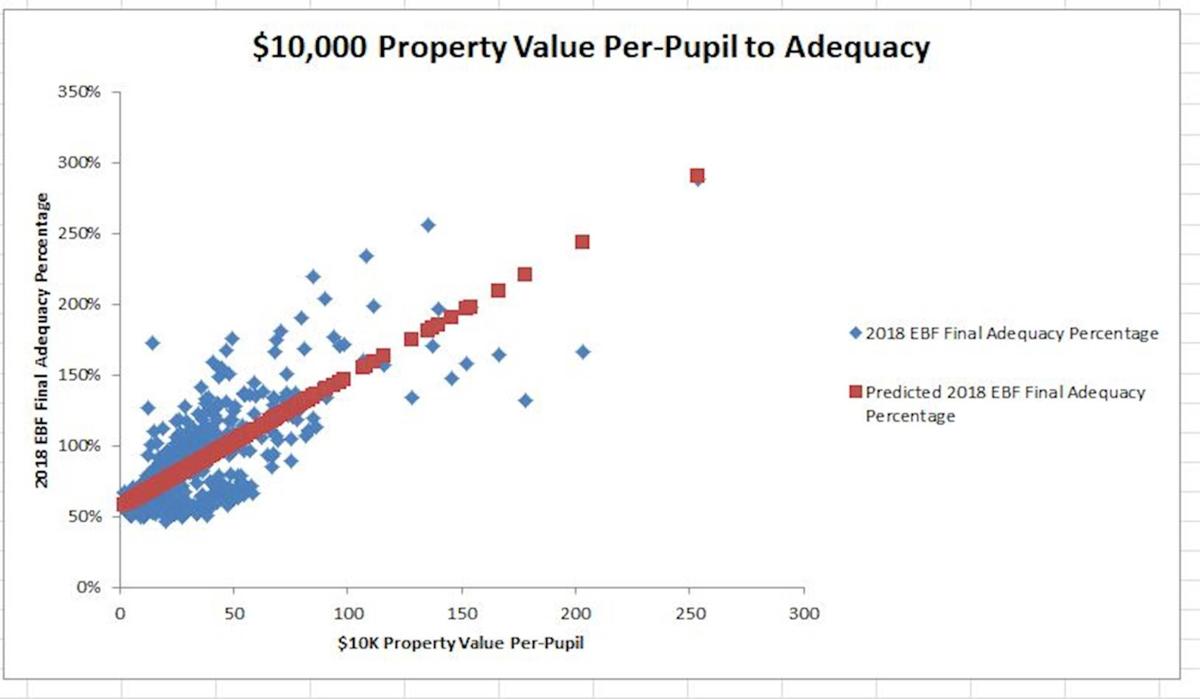 This graph shows the relationship between per-pupil taxable property value, measured in units of $10,000, and the funding adequacy of 850 Illinois school districts. Blue dots represent actual measurements. Orange dots represent a “line of best fit” to explain the relationship. A $10,000 increase in a district’s per-pupil taxable value yields, on average, a 0.9 percentage point increase in funding adequacy. (Source: Illinois State Board of Education) 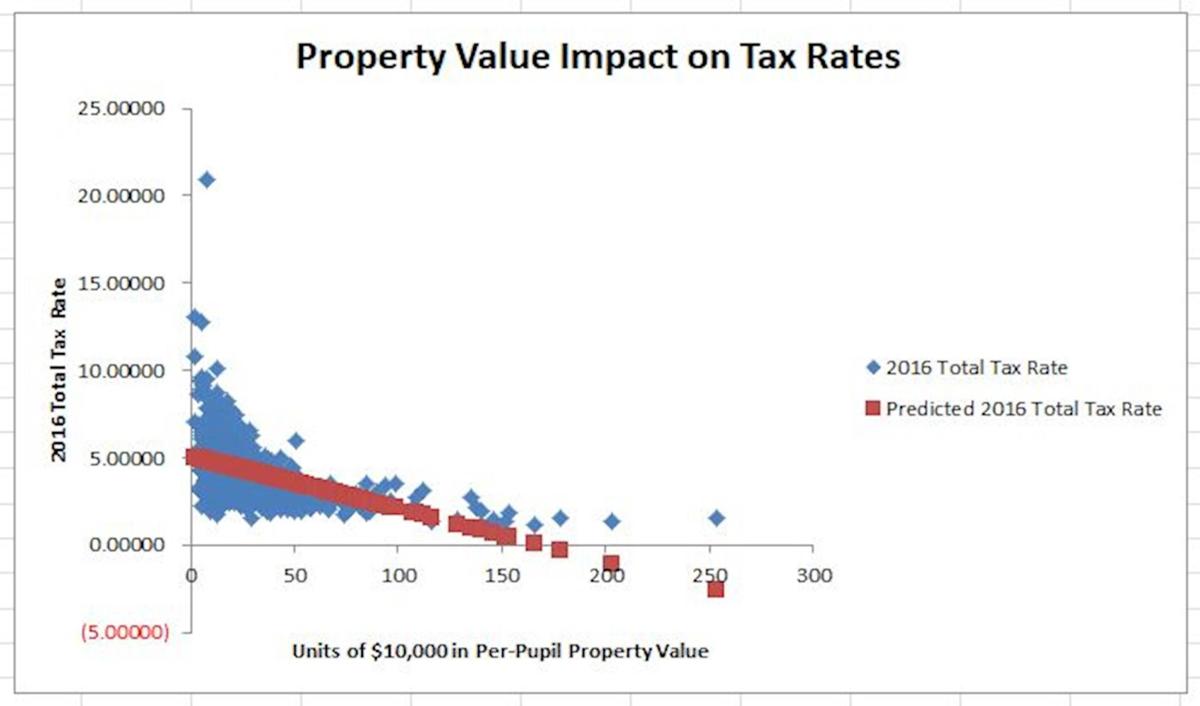 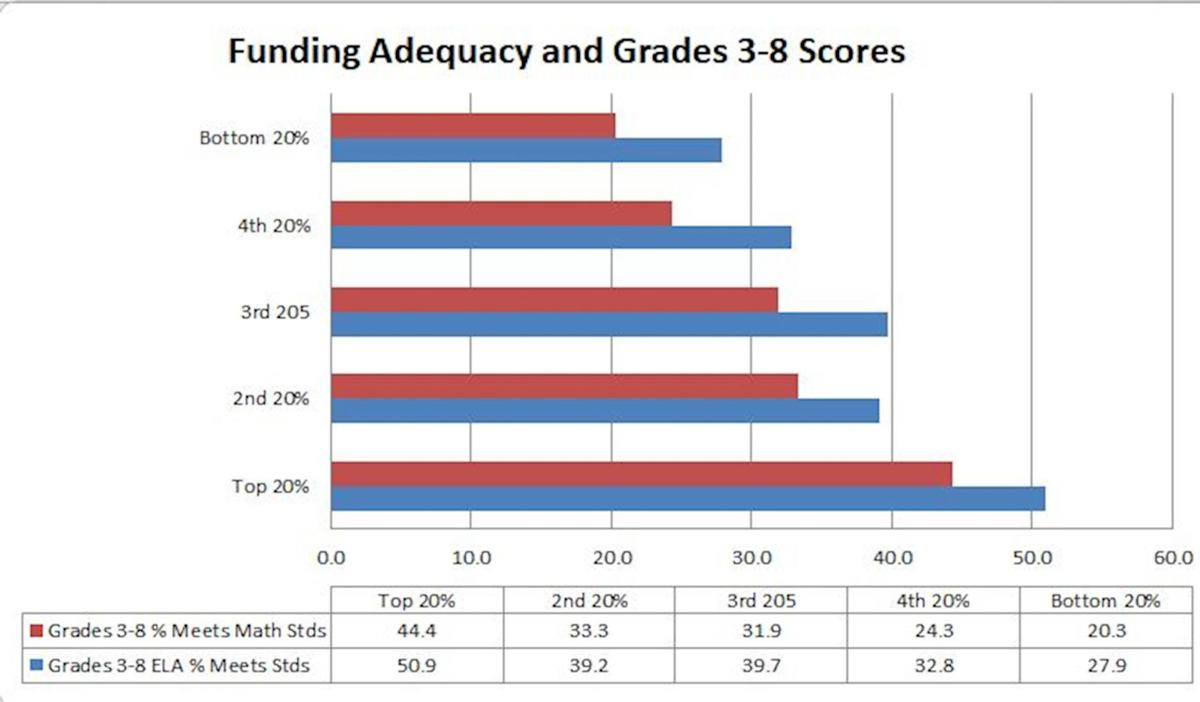 Elementary students in the best-funded school districts in Illinois perform better than all other students on standardized English language arts and math tests. (Source: Illinois State Board of Education) 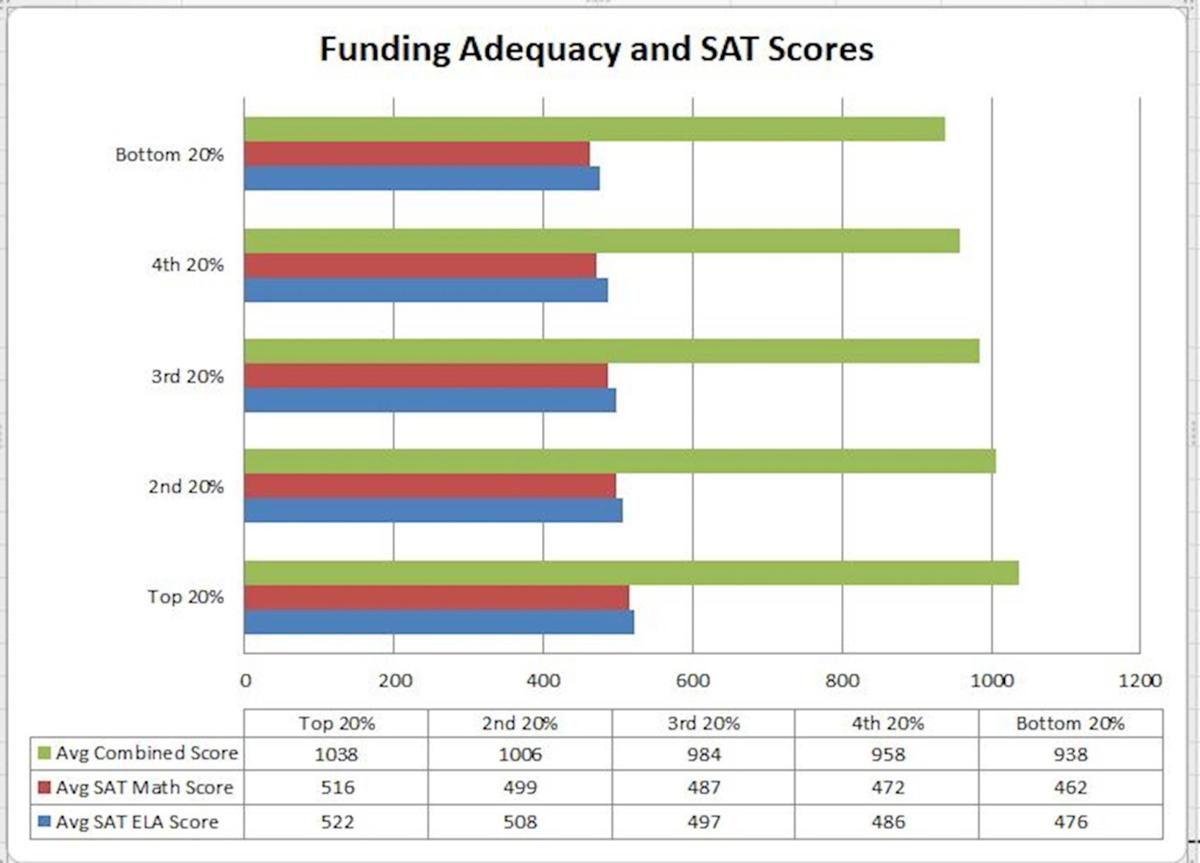 High school students in the best-funded school districts in Illinois outperform other students on SAT English and math tests. (Source: Illinois State Board of Education)

This graph shows the relationship between per-pupil taxable property value, measured in units of $10,000, and the funding adequacy of 850 Illinois school districts. Blue dots represent actual measurements. Orange dots represent a “line of best fit” to explain the relationship. A $10,000 increase in a district’s per-pupil taxable value yields, on average, a 0.9 percentage point increase in funding adequacy. (Source: Illinois State Board of Education)

Elementary students in the best-funded school districts in Illinois perform better than all other students on standardized English language arts and math tests. (Source: Illinois State Board of Education)

High school students in the best-funded school districts in Illinois outperform other students on SAT English and math tests. (Source: Illinois State Board of Education)

SPRINGFIELD — Education officials in Illinois say the state is making solid progress under its new evidence-based funding program in narrowing the wealth-based disparities among school districts, but an analysis of the first year of that program shows just how far the state still has to go.

During the 2017-2018 academic year, new data from the Illinois State Board of Education shows, school districts with large amounts of property wealth were better funded than their property-poor counterparts, enabling them to spend more money per-pupil. That in turn translated into higher student test scores in math and English language arts.

Meanwhile, residents of property-poor school districts generally paid higher property tax rates than people in wealthy districts, while their school districts continued to be underfunded and fewer students in those districts were able to meet state expectations on standardized tests.

Those are the conclusions of an analysis by Capitol News Illinois that examined financial information from 850 public school districts, combined with school performance data from the Illinois Report Card during the 2017-2018 academic year, the most recent year for which all data is available.

“None of that surprises me,” state Sen. Andy Manar, D-Bunker Hill, said in an interview. “None of what the state board released is shocking to me because the compromise at the end was an incremental step.” He is the chief architect of the evidence-based funding system.

The idea was to determine each school district’s “adequacy target” — the amount of money it needs to provide the educational services required by the state. That target is based on factors unique to each district, such as the district’s size, and the number of low-income students, English language learners and students with special education needs.

The 2017 law also calls for the state to increase school funding by at least $350 million each year, with districts furthest below their adequacy target getting first priority for new money. The stated goal is to bring all districts up to at least 90 percent of adequacy by 2027.

According to data released at ISBE’s June meeting, however, the increased annual investment in the formula would need to be closer to $660 million in order to bring all districts to 90 percent adequacy during that span.

According to ISBE, it would have cost the state an additional $7.4 billion in fiscal year 2018 to bring al districts up to at least 100 percent of adequacy. For the current fiscal year, that figure stands at $7.1 billion.

The evidence-based funding system went into effect in the 2017-2018 school year, and final numbers for that year from the Illinois State Board of Education were just released in August.

Bruce Baker, an education professor at Rutgers University in New Jersey who studies school finance systems, said Illinois for many years had one of the most inequitable funding systems in the country.

“I think Illinois is as big an outlier as it is, in part because the city of Chicago is such a large district with such concentrated poverty and has been poorly funded for decades now, and it’s a very expensive problem to fix,” Baker said in a phone interview. “It costs billions of dollars to dig the city of Chicago out of its hole, and that means within a statewide budget, finding that much money to target into one area of the state, which is always a very difficult political problem to solve.”

Chicago Public Schools, with just over 372,000 students, is the third-largest school district in the nation, and in terms of property value, it’s a district of great wealth. In the 2017-2018 year, it reported just over $74 billion in taxable property value.

But the Chicago district also has a relatively low property tax rate, levying just 3.36 percent of equalized assessed value, far below the statewide average of 4.3 percent. Revenue from local taxes, at just under $3.5 billion, made up 56.3 percent of the district’s total revenue. The state of Illinois paid in just under $2 billion, or 31.9 percent.

Elsewhere in the state, however, property wealth was the single biggest determinant of how adequately funded a district is.

According to ISBE data, there was a clear correlation between property wealth and funding adequacy: Poorer districts tended to be the least adequately funded, while wealthier districts enjoyed the greatest funding.

During the 2017-2018 academic year, the data shows that, generally, a $10,000 increase in a district’s per-pupil taxable property value translated to a 0.9 percentage point increase in the district’s funding adequacy.

That is primarily due to local resources, largely property taxes, accounting for two-thirds of all education spending in Illinois.

“Student background is a big deal, and adequate funding providing smaller classes and more qualified teachers can offset some of that,” Rutgers University’s Baker said. “However, inadequate and inequitable funding will only serve to reinforce it. So you’ve got everything self-reinforcing here. You’ve got the neediest kids in the poorest districts with the least resources.”

The poor districts were led by the Ford Heights School District 169, in Cook County, which reported a per-pupil property value of just under $79,000, less than one-third the statewide average, where property owners paid a school tax rate of nearly 21 percent, nearly five times the state average.

At the other end of the spectrum was the wealthiest district on a per-pupil basis, Rondout, with per-pupil property value at more than $2.5 million and where residents paid a tax rate to the district of just 1.57 percent, the eighth-lowest rate of any school district in the state.

Some property-poor districts also paid low tax rates, like Rome CCSD 2, in Jefferson County, where per-pupil property values were less than half the state average but where the school tax levy was just 1.96 percent.

In general, though, analysis of the 2017-2018 data showed that a $10,000 increase in a district’s per-pupil property value translated into a 3 percentage point decrease in its tax rate.

The 2017-2018 data also shows a clear relationship between funding levels and student performance on standardized tests. Students in the best-funded school districts routinely scored higher on tests of English language arts and math.

Illinois tests students annually in grades 3 through 8 on English language arts and math. At the high school level, students are tested in the 11th grade using the SAT exam.

Of the 850 districts examined, 754 have elementary classes and 472 have high school classes.

When those districts are ranked from top to bottom in terms of their funding adequacy, clear patterns emerge.

At the high school level, being in a district at the top of the funding scale translates roughly into 100 additional points on the SAT exam compared to students at the bottom end of the scale — 55 points on the math portion and 46 points on English language arts.

Illinois is now in its third year under the Evidence-Based Funding system and the state has added hundreds of millions of dollars in additional school funding in the past two years. But it won’t be known for another two years how much of an impact that money has on the tax inequities and achievement disparities that were evident in 2017-2018.

Dan Cox, superintendent of the Staunton school district in Madison County, said he believes it had a significant impact. Staunton, he said, started out at 58 percent of adequacy but has since climbed to 61 percent.

“That doesn’t sound like a lot, moving from 58 percent to 61 percent, but I can tell you we were really in desperate times prior to passage of EBF,” Cox said in a phone interview.

“Since that time, for the first time in 14 years, we finished with a balanced budget,” he said. “We’ve been able to hire — and this is something we’re extremely proud of — 15 additional instructional employees, 11 of those being classroom teachers, and four paraprofessionals. Our main focus in doing so was to reduce class size. We’ve provided academic and behavioral interventions and we increased our social-emotional supports for students.”

Cox gave much of the credit to Sen. Manar for crafting the funding system and pushing it through the General Assembly in 2017.

Still, he acknowledged that even if the state were to meet its goal of bringing all districts up to at least 90 percent of adequacy by 2027, that would mean a student now in the fifth grade will already have graduated high school by the time that goal is achieved.

“We’ve got to start somewhere, but there still needs to be a sense of urgency,” he said. “I do see a definite shift in a prioritization of education funding, but I also know there are a lot of priorities that pull our Legislature in many different directions and it’s important for us to keep education at the forefront of that.”