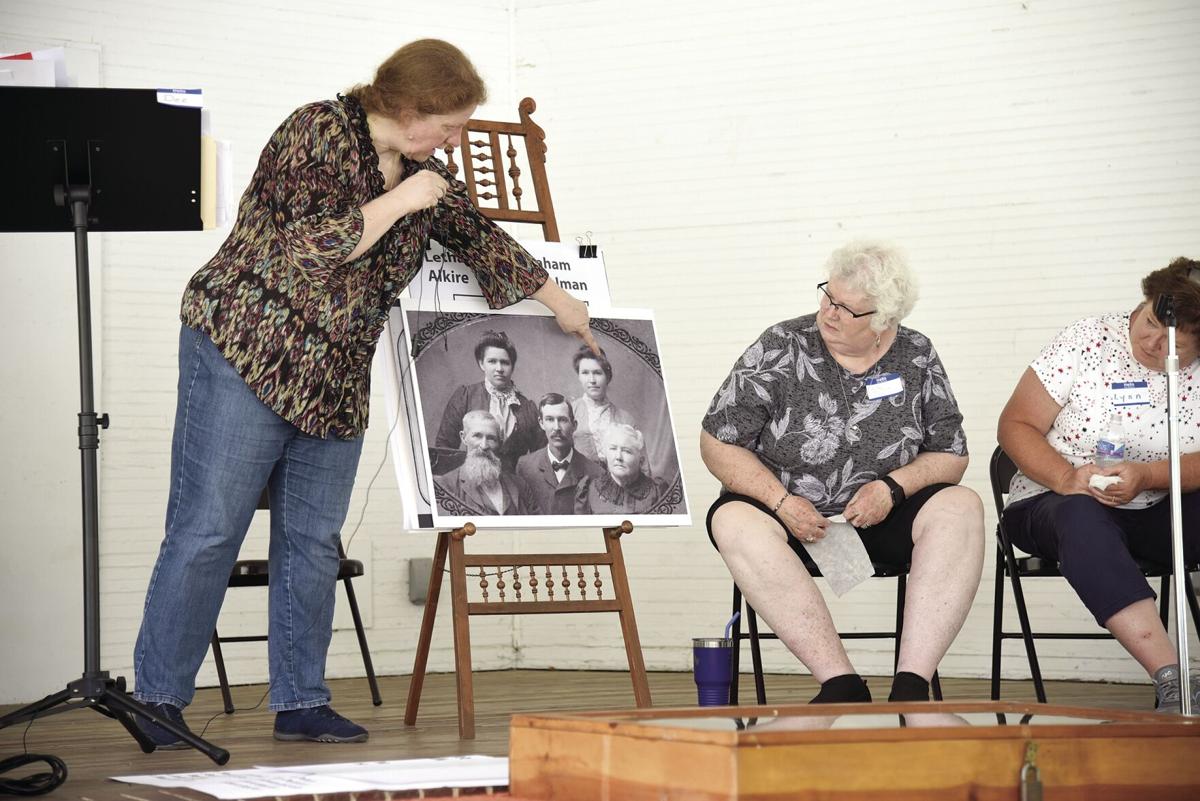 Piatt County Historical and Genealogical Society President Dee Lund goes over results of research done on the Honselman family of Piatt County. Looking on are Honselman descendants who attended the 40th anniversary presentation of the society on June 12. 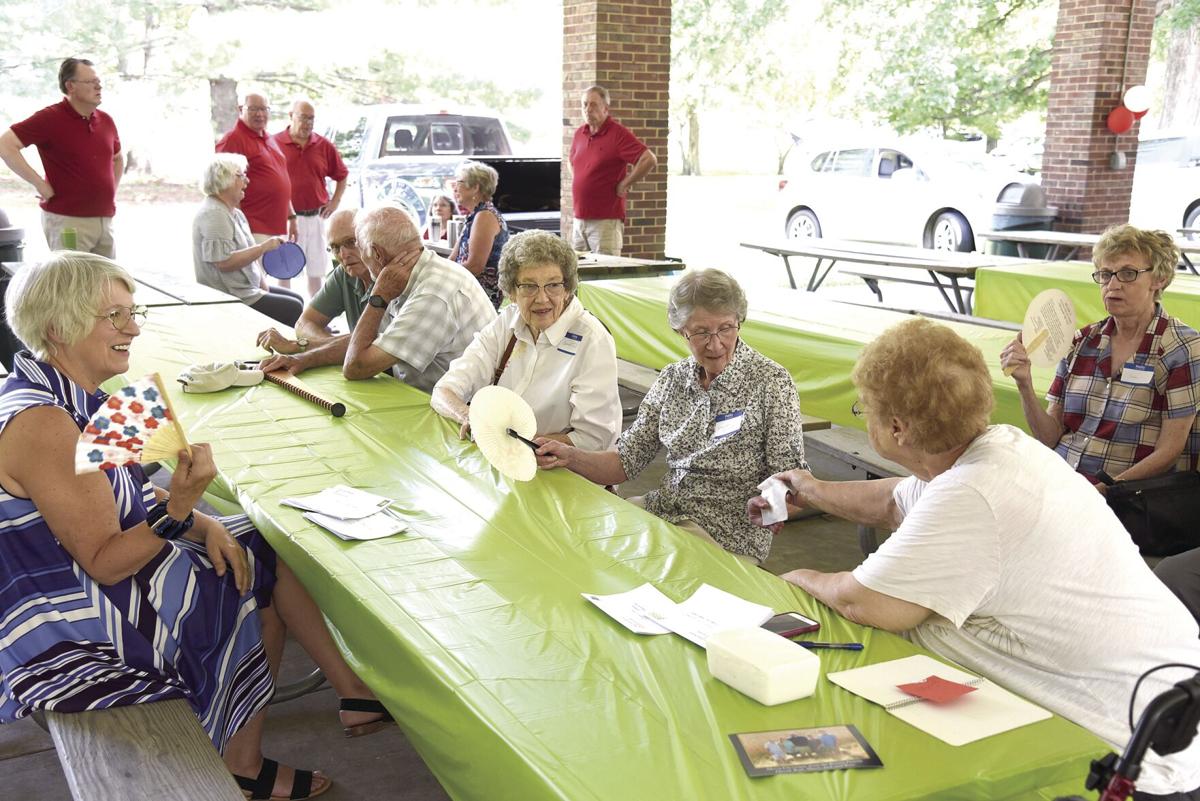 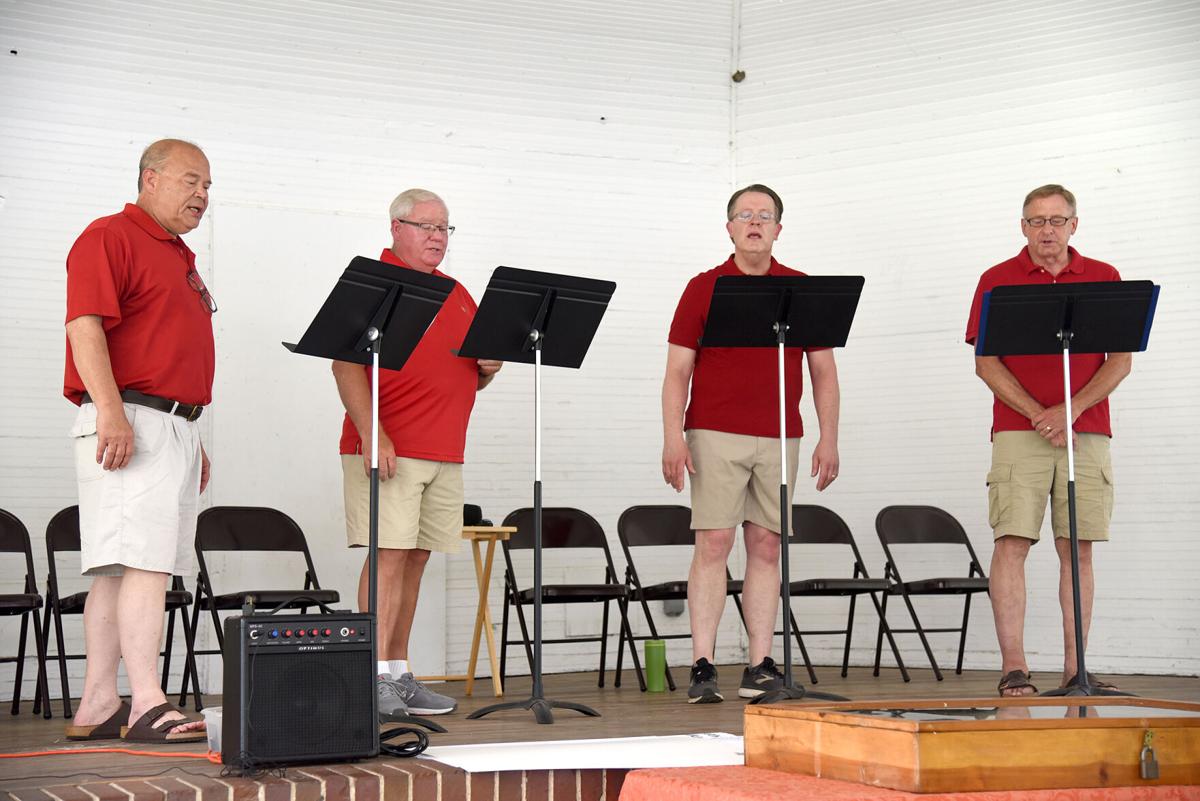 The musical group 'Those Guys' performed at the 40th anniversary celebration of the Piatt County Historical and Genealogical Society on June 12 at Forest Preserve Park in Monticello.

Piatt County Historical and Genealogical Society President Dee Lund goes over results of research done on the Honselman family of Piatt County. Looking on are Honselman descendants who attended the 40th anniversary presentation of the society on June 12.

The musical group 'Those Guys' performed at the 40th anniversary celebration of the Piatt County Historical and Genealogical Society on June 12 at Forest Preserve Park in Monticello.

MONTICELLO — Genealogical research can be a long, tedious process. Sometimes it yields little.

And sometimes it gives fantastic answers to questions you weren’t even asking.

Such is the case of the Honselmans, one of the first non-native families to settle in Piatt County.

The question of Godrey Honselman and his somewhat-mysterious death in 1846 was what the Piatt County Historical and Genealogical Society wanted to answer during research being conducted for its 40th anniversary.

More on that later.

The year-plus-long study also turned up letters from a Honselman family member who ended up in Wyoming and witnessed the historic signing of a major peace treaty between the U.S. government and Sioux and Arapaho Native American tribes in 1868.

Former Monticello resident William Honselman — a son of Godfrey — claimed to be writing a letter home with the same pen used by Sioux Chief Red Cloud to sign the Treaty of Ft. Laramie just days earlier.

“Mother, I write to you with a pen that Red Cloud, the greatest Chief of the west signed the treaty of peace. He signed it on the sixth of this month,” William said in the letter to mother Ann Honselman dated just days after the treaty was signed.

“I will bring this pen home so that you can see it,” he added, noting Red Cloud said he would not touch a white man’s pen again.

The finding was announced by Historical and Genealogical Society President Dee Lund at its 40th anniversary gathering June 12 at the Piatt County Forest Preserve Park in Monticello.

Lund said the tidbit came to light less than two weeks prior to the anniversary event.

“I just got chills,” Lund said when the transcription of the letter was read to her. “After getting the chills from it, I immediately went into research mode to learn as much as I could about the treaty and try to learn what William was doing out west.”

She did not learn much in that regard, except that William was a carpenter plying his trade out West.

Lund said scans of the second page of the letter were not legible She hopes to get a transcription soon from the university, which could shed more light on the treaty signing.

The discovery might not have happened without the pandemic, which gave the Society an extra year to research the Honselman family. Studies in 2020 originally focused on the family and fate of Godfrey, who died while attending to family business in Indiana in 1846.

When the 40th celebration was canceled last summer, Lund said they decided to dig deeper, talking to descendants who now live elsewhere. That led to the discovery of 28 letters written by William Honselman that had ended up in the archives at the University of Colorado.

William Honselman had a reputation of having good relationships with Native American people while living in central Illinois, according to Lund. That seemed to continue after he moved to Colorado, where he talked on treaty day with not only Red Cloud, but at least three others from the Sioux and Arapaho nations present at the signing.

So, while the Historical Society had initially gone after information about Godfrey, his eldest son William ended up taking center stage.

“He definitely stole the show. We thought Godfrey was going to be our focus. We tried to figure out his connection to Germany because we haven’t found those specific ties yet,” Lund said.

The treaty of Fort Laramie – also known as the Sioux Treaty – signed 153 years ago is still relevant. It guaranteed exclusive tribal occupation of extensive reservation lands west of the Missouri River, including the Black Hills, which are sacred to many Native peoples.

The government made good on a provision to vacate military posts within 90 days, but broke the treaty 90 years later when it seized the Black Hills.

The United States Supreme Court ruled in 1980 that the United States acted in bad faith and set compensation for the Black Hills at $102 million. The Sioux have refused to accept the payment, instead insisting they want their land back.

The battle continues to this day.

For its 40th anniversary, the Piatt County Historical and Genealogical Society took a poll as to which local family it should delve into. Lund said the Honselmans were the prohibitive pick, even beating out the namesakes of the county — the Piatt family.

Godfrey’s wife Ann (Tenbrook) made her mark after her husband’s death. She bought an empty blacksmith shop and converted it into a log home just west of the courthouse square. After surrounding homes become more modern, the “Honselman Cabin” became somewhat of a tourist stop prior to being torn down in 1920.

Initial research on the Honselman family was conducted by Society members, including Jack Stiverson, Deanna O’Reilly, Lucia Wilkin and Lund.

Lund got help from her Minnesota-based sister, Lori Capistrant, who helped transcribe William Honselman’s letters and was the one to find the treaty-signing reference.

In 1846, seven years after moving to the Monticello area and just a year after buying a new home, Godfrey trekked to Indiana and the Cincinnati area for family business and to possibly help his brother take care of issues surrounding their father’s estate.

He died on the trip, but just where and the circumstances surrounding it have not been well known.

Lund said her research shows he likely died of either a bout of malaria or typhoid.

“A majority of the stories say that on the way back, he stopped in the Brookville (Indiana) area, partially to visit with people he knew in the area from the seven to eight years they lived there, but also because he wasn’t feeling well. And so he probably died there, more than likely,” Lund said.

Where he was laid to rest is unknown, but a chance discovery in 2015 of the Wiley Family Cemetery in Franklin County, Ind., has shed some light.

“They were good friends of the Wileys. Godfrey was visiting Spencer Wiley, a brother to Addison Wiley, who lived here (the property where the cemetery is). And Addison was married to (Godfrey’s wife) Ann’s sister,” Lund said.

So while the issue is not resolved, she feels they are closer to solving it.

“We believe there is probably more documents in the historic archives of Franklin County that we might be able to get more information,” she said.    “So after this program and moving forward, I’ll be trying to work with other Honselman family members to figure all that out.”

The Wiley Cemetery is overgrown and only includes field stones without names, making identification of graves difficult without documentation.

Another unique story uncovered in the society’s research revolved around James Honselman, another son of Godfrey. Dishonorably discharged from military service during the Civil War, it was found later to be erroneous and changed to an honorable discharge and his pension restored.

He returned to Monticello to become a “respected fruit farmer” in the area, said Lund, pointing out he was featured in several trade magazines of his day.

During Prohibition, he did not necessarily stop making wine.

“They developed a wine that they claimed would not intoxicate you because they stopped the fermenting process at a certain time and tried to say to anybody, ‘You can drink as much of this as you want, and eventually you might get a little silly, but you’re never going to get drunk on it.’” Lund said.

Lund could not find whether the non-intoxicating claim was ever proven.

Other facts uncovered during the Society’s research effort:

— Godfrey Honselman and Ann Tenbrook met in Cincinnati. In 1832 they moved to Franklin County, Ind., mostly to get away from a cholera epidemic. The Tenbrooks moved to the Monticello area in 1838, with the Honselmans following a year later after being told it “was a good place to be.”

— The Wiley Family Cemetery, thought to be lost to time was found by hunters who happened upon it in 2015;

— Ann (Tenbrook) Honselman was known for the ledger she kept, which among other things would document people who had passed away. Lund said it has become a valuable resource since newspapers did not routinely report all deaths, and reporting them to authorities was not mandatory at the time. Ann’s ledger also kept track of sewing she did for people and what she had been paid;

— Godfrey and Ann Honselman’s youngest child, Caroline, married Caleb Tatman, an attorney and one-time county school superintendent. The Tatman family is well known to this day through a land trust that supports efforts including Tatman Village;

— The fourth child of the couple was Abraham, who married Letha Alkire and eventually had the largest family of the Honselman children.

Do you have more info?

About 50 people attended the 40th anniversary presentation, including several ancestors of the Honselman family who now live in the Casey, Illinois area.

Lund is asking the public for additional tips on the Honselman family. Those tips can be emailed to her at piatthistory@gmail.com, or be leaving a message at the historical society museum at 217-762-9997. Since the museum has limited office hours, it may be several days before telephone calls are returned.