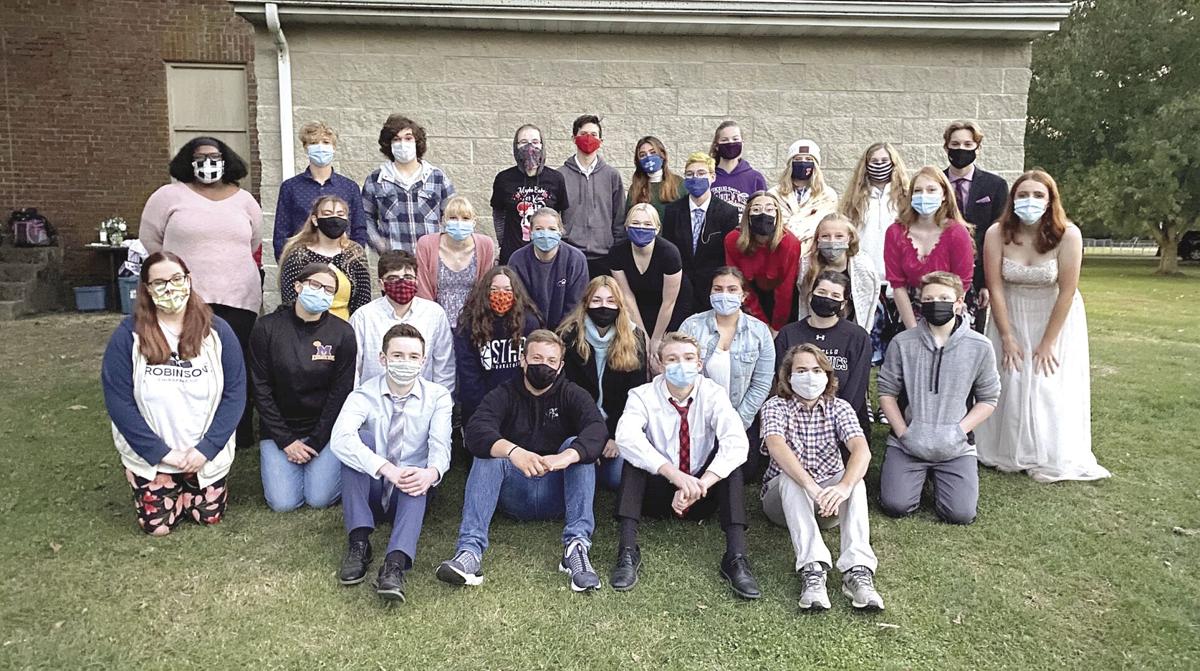 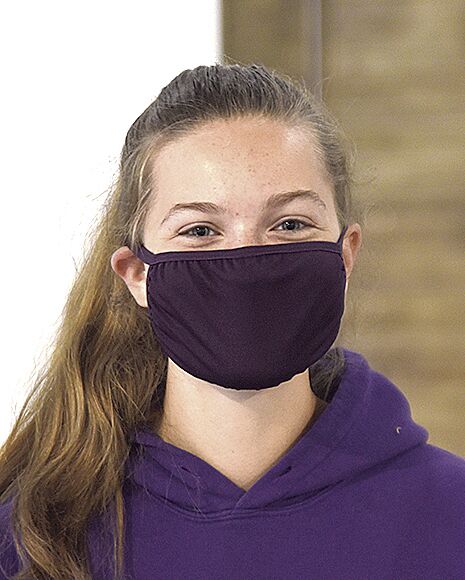 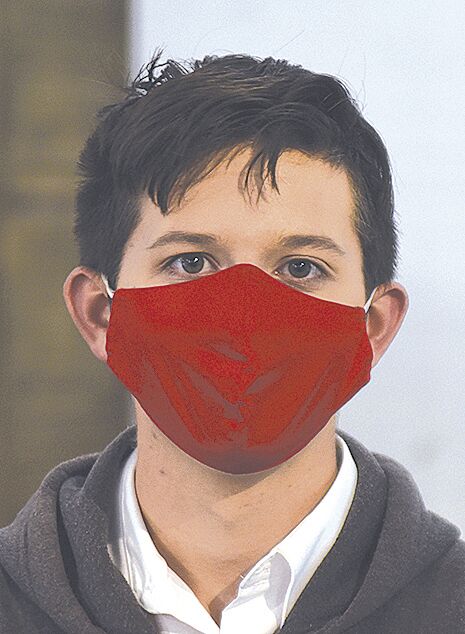 Because of COVID-19, the fall play could not take advantage of those fresh accoutrements, but this year’s actors took on the challenge, masked up and observed as much social distancing as possible to perform outdoors in the Piatt County Forest Preserve Park pavilion in Monticello a couple of weekends ago.

Of course, acting in masks presents challenges. But junior Grace Stapf thinks it made her a better actress.

“The hardest part was how do we show affection for another person with masks, with distance, and it’s a lot of facial expression, because you have that barrier of the mask, and you can’t go and touch or fake kiss someone. You just have to have that eye contact – that look,” she told the Journal-Republican.

There were some advantages, notes sophomore Ryan Olsen, who played Stapf’s mutual romantic interest in the presentation, which was performed Oct. 2-5, extended one day due to a rainout.

What I like is all the props are going to the same place. Last year I had a lot trouble finding them,” said Olsen. “So now everything’s in one green tub, and I’m like ‘all right, let’s do this! It’s all right here!’”

Both actors appreciated the work done by director Nicki Graham and assistant director Amy Malone, who had to find a script that would work with pandemic-related restrictions.

“It’s the simple life over here, without huge lights and all that kind of stuff, but I think it just shows the power to bust through these barricades and burst up there,” he noted.

We asked Graham and the two actors their feelings about this year’s production and what was needed to pull it off in 2020. Enjoy!

J-R: What play was done this year? Why that one?

Nicki Graham: “Maybe Baby, It’s You” (a series of 11 vignettes about our search for a soul mate). I read a lot of scripts all summer and picked this one due to the 2-3 person scenes so we could socially distance on stage and during rehearsals. Plus, I loved the concept of the show...the search for love and what happens when we think we’ve found it (or lost it) is something everyone can connect to.

J-R: How were things done differently due to COVID-related precautions?

Graham: We had three different rehearsal periods with three different groups practicing at a time. The assistant director worked with one group, my student director worked with another, and I worked with the third--and then we’d rotate through. Some groups met after school at the Forest Park Pavilion and others met at school. This was to limit the contact students had with only the students in their scenes. Probably the biggest change was obviously being in masks but we’re all used to that at this point.

If the actors could be more than 6 feet apart in a scene, they went unmasked for the dress rehearsal and performances only, but if not they wore clear masks we bought so the audience could see their expressions. After their scene, students went right back to wearing their regular masks. We had to change some aspects of the script since no one could touch and we had to block the scenes so students were distanced; other than that, it was business as usual.

J-R: What was the most difficult aspect about putting on this production amid current restrictions?

Graham: We are social creatures by nature so just trying to stay distanced was a challenge at times but the cast understood how lucky we were to be given the chance to perform, so they followed our guidelines. Obviously doing the show outside brought about its own challenges with weather but the Piatt County Forest Preserve Park District was wonderful to work with. Angela Guffey was very accommodating and allowed us to rehearse there whenever we needed as well as letting us have it for the whole week of the show. We parked a school trailer at the Pavilion and set up all our props, set pieces, and sound/lighting equipment every night and then packed it away every night. The football team provided volunteers to come each night of the show to move the picnic tables and set up chairs for our audience and then returned in the evening to help move everything back. Throughout rehearsals we had the best weather imaginable, but the weekend of the shows it was pretty cold, and we were rained out Saturday night. Other than having to move that show to Monday, the experience really turned out so much better than I think we all expected.

J-R What was the most rewarding part about this year’s play?

Graham: The most rewarding aspect was simply being with the students again and creating theatre! We were so lucky that last semester we finished “Mamma Mia!” right before everything shut down, but we had to cancel our student-directed one-acts. I know we were all nervous we wouldn’t be able to do a fall show, but we were able to find a creative solution. I was just so happy to watch these students get the chance to do what they love and provide them with some sense of normalcy.

J-R: How did the kids do this year?

Graham: Of course, they were awesome! What I loved the most about this play is that everyone had a chance to shine and develop characterization.

Once we started dress rehearsals, it was so fun to see the different groups watch each other’s performances and cheer each other on. I think that’s what we’ve all missed the most through all of this--the camaraderie.

J-R how did you control the size of the crowd?

Graham: Due to Covid and the park district’s restrictions, we were only allowed to have 50 people under the pavilion. This worked out to each person getting to invite two people for each night we performed. We made sure family groups were separated from others by 6 feet and everyone wore masks. Although I’m sad that we were unable to have more guests, each audience was filled with our closest loved ones. I know the students felt so much love and support each night.

J-R: What was the hardest adjustment to make this year amid all precautions.

Stapf: Having to overcome the mask, and still having that confident stage presence. I had to realize the mask can’t hold you back. You just have to keep going and act through. Sometimes there are malfunctions with masks on stage, but we got used to it.”

Olsen: Yes, the masks. We had to push past the masks and fill the entire building. And there were mask malfunctions; yesterday my chin piece fell off, and the night before her nose piece flung up. Also, we don’t have a prop room, so everything’s in the trailer right there. So every day we have to take it out and put it back. We can’t leave it out there.

J-R: Did it take a little bit to warm to the idea of doing a play that had automatic distancing? Did it take a while to buy into this?

Olsen: When we got together to do our first read-through, we kept asking ‘can we do this? Are we allowed to do this?’ So we had to make a lot of changes. I wear a wig, and we had to ask ‘is she allowed to touch the wig, or do we have to change that up so that it is more social distancing? So, it’s been an adjustment period figuring out how we could change the scenes to work with social distancing.

Stapf: Honestly, I bought in the first time we did the read-through. It was difficult, with changes. The hardest part was how do we show affection for another person with masks, with distance, and it’s a lot of facial expression, because you have that barrier of the mask, and you can’t go and touch or fake kiss someone. You just have to have that eye contact – that look.”

J-R: What’s the best part of this year’s production? What’s the most positive thing you’ve taken out of it?

Stapf: I think the backstage area (outside behind the pavilion). We get to stand back there and enjoy everyone’s scenes, dance, and laugh. To me that is the most fun, getting to know those people. Especially during quarantine, I feel like a lot of us missed that human interaction and all that stuff, so it’s so nice to be back in an environment where have that again.

Olsen: What I like is all the props are going to the same place. Last year I had a lot trouble finding them. So now everything’s in one green tub, and I’m like ‘all right, let’s do this! It’s all right here!’

J-R: How do you like performing outdoors? Is it kind of cool?

Olsen: Yeah, I kind of like it. It gets cold, but on stage I feel like the cold kind of drains out and it’s nice to be out here. I’m not sweating on stage. I get all hyperactive and warm up, so this works.

Stapf: Backstage you are kind of shivering, but as soon as you get on stage you’re like, ‘my character is not cold. I cannot be cold. My character is in a dress without sleeves, so I am freezing. But for the audience, I just can’t be cold.”

J-R: Do you guys have anything else to add?

Stapf: I’m really thankful for Mrs. Graham and (assistant director) Mrs. (Amy) Malone, being able to still have this. Even though the stage is a little smaller than we are used to, we still hav the opportunity and all that good stuff.

Olsen: I just think that it’s, like really cool we were able to do this, especially with everything going on. We were just able to adapt our program into something that we could do out here. It’s the simple life over here, without huge lights and all that kind of stuff, but I think it just shows the power to burst through these barricades and burst up there.”