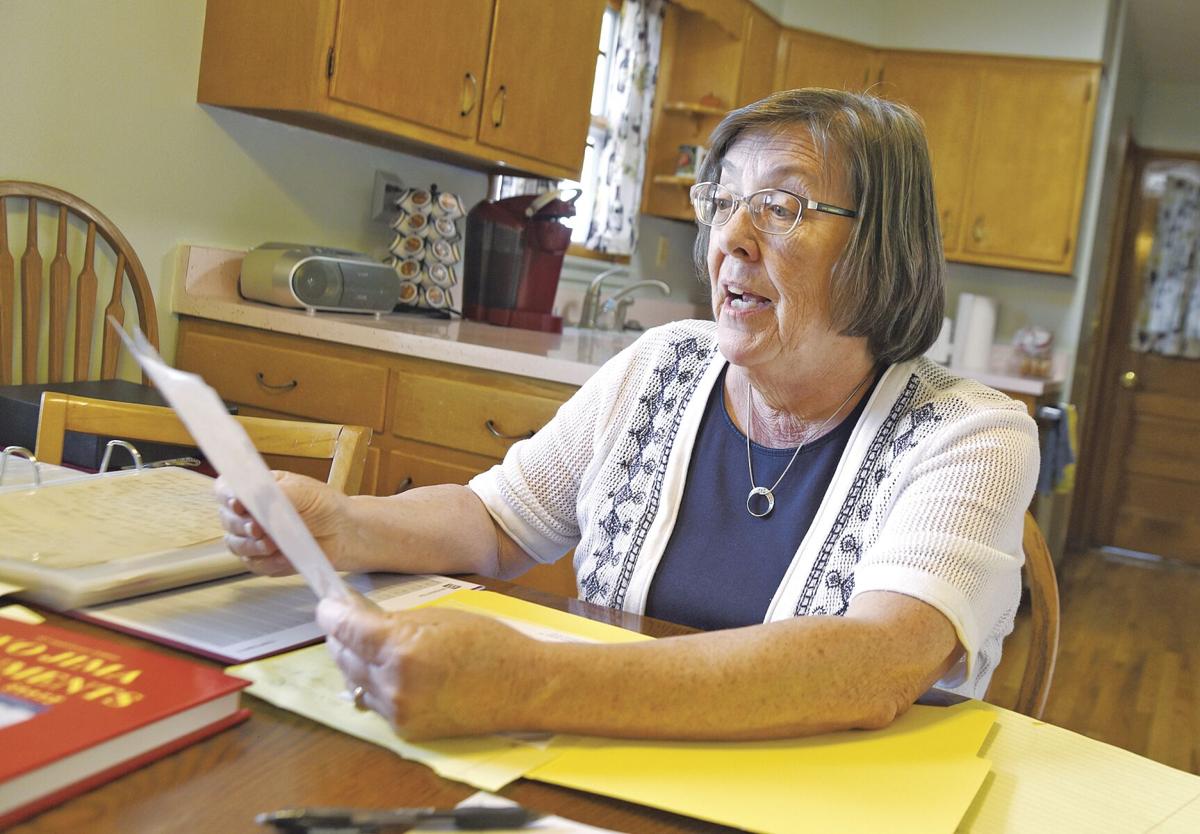 Gloria Cardoni, the daughter of the late Les Gadbury, reads a letter that her father wrote home while in the Marines during World War II. 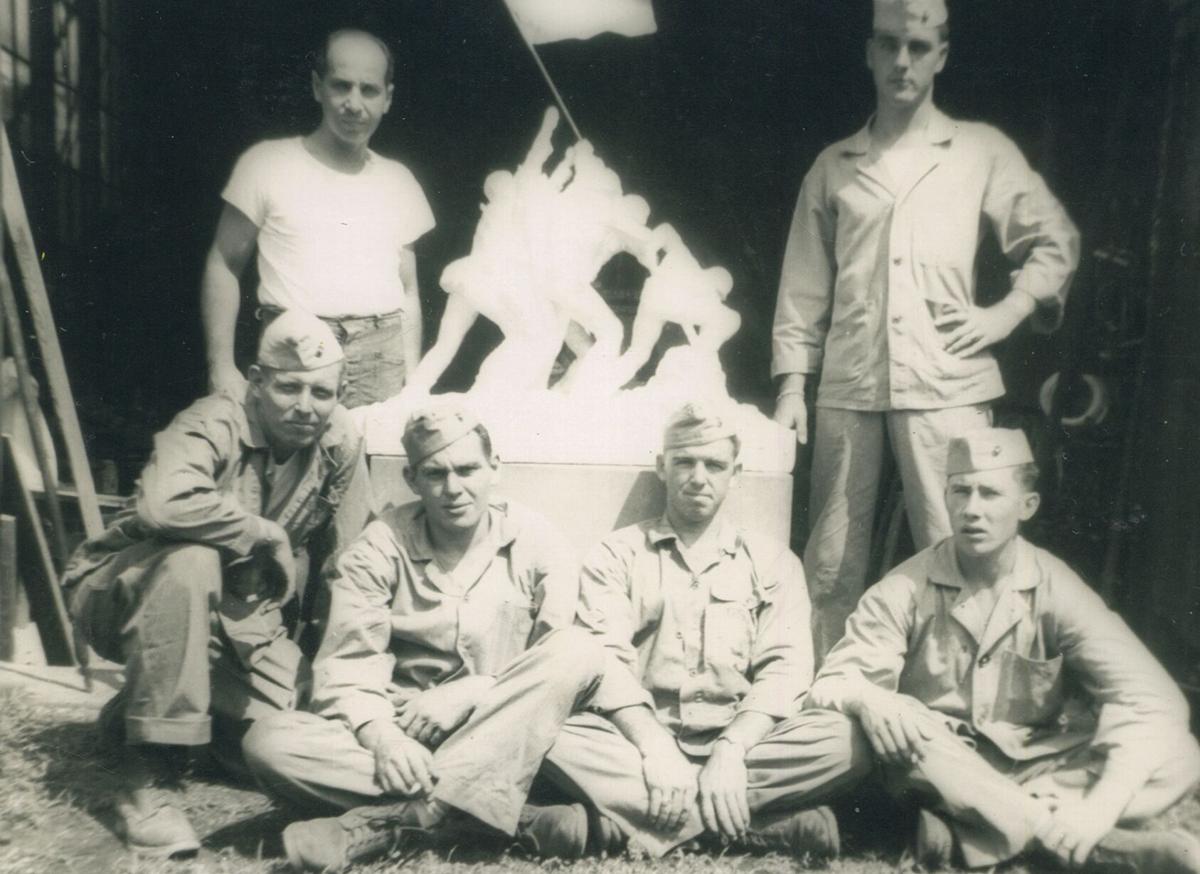 Les Gadbury of Monticello, pictured second from the right in the front row, was one of a select group of Marines to help sculptor Felix de Weldon (back left) craft his original Iwo Jima monument. A model of it appears in this photo. 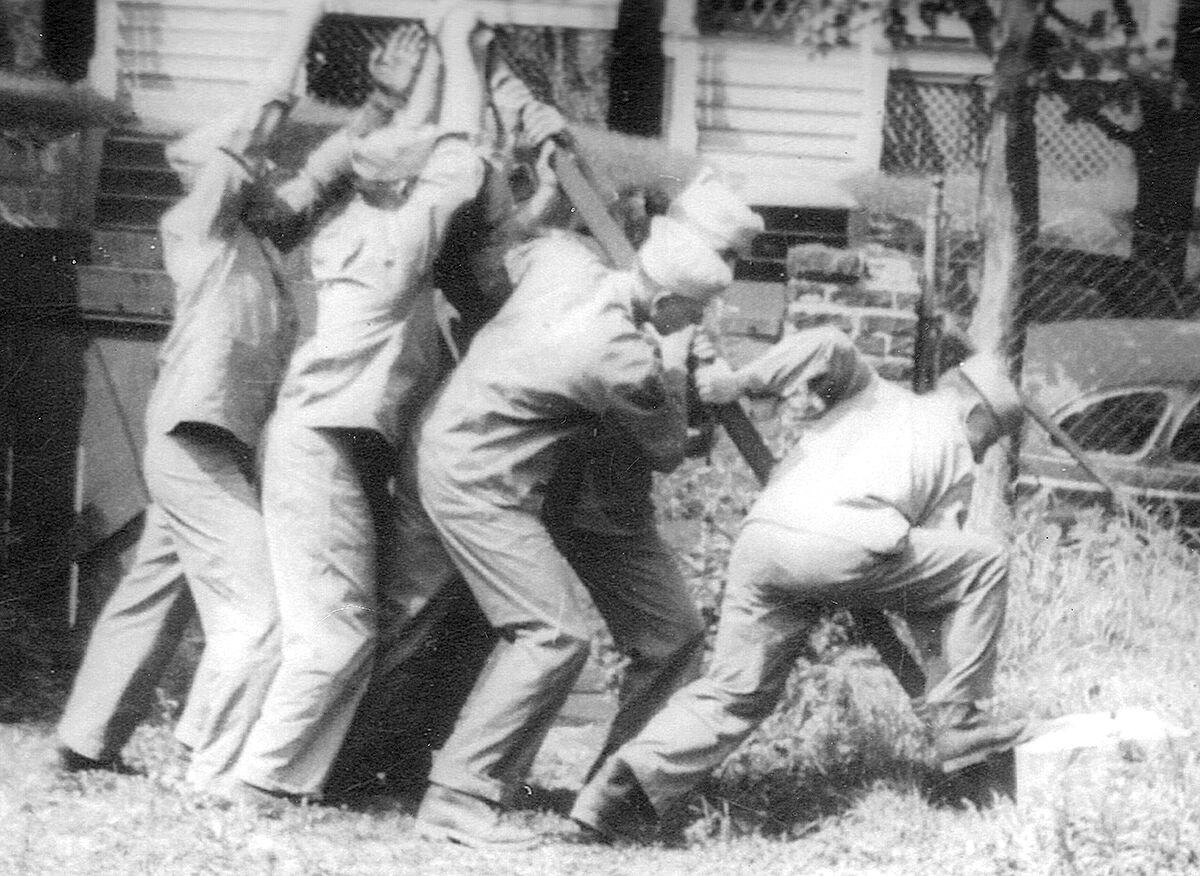 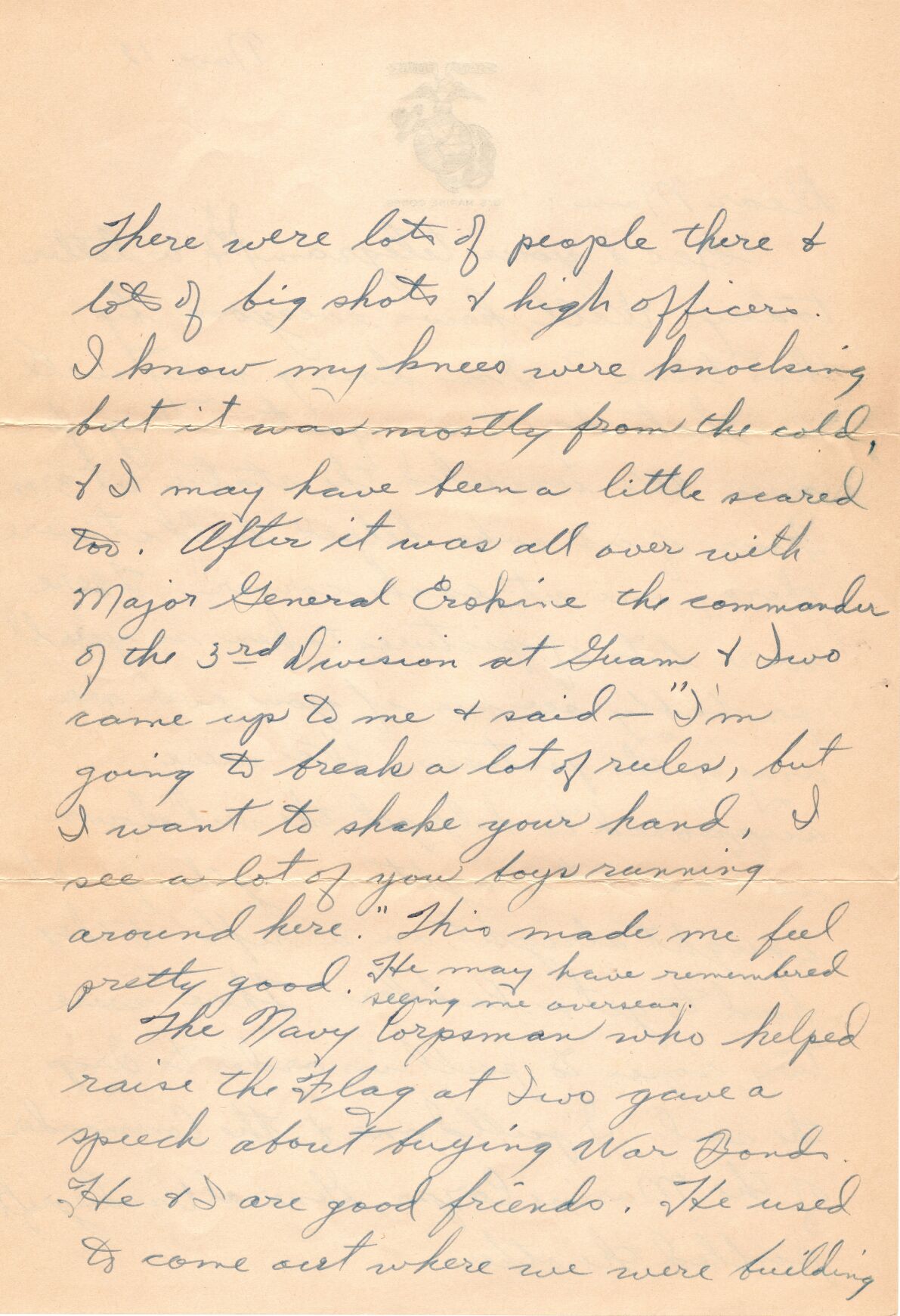 A portion of a letter Les Gadbury sent home after helping unveil the original Iwo Jima statue in Washington, D.C. 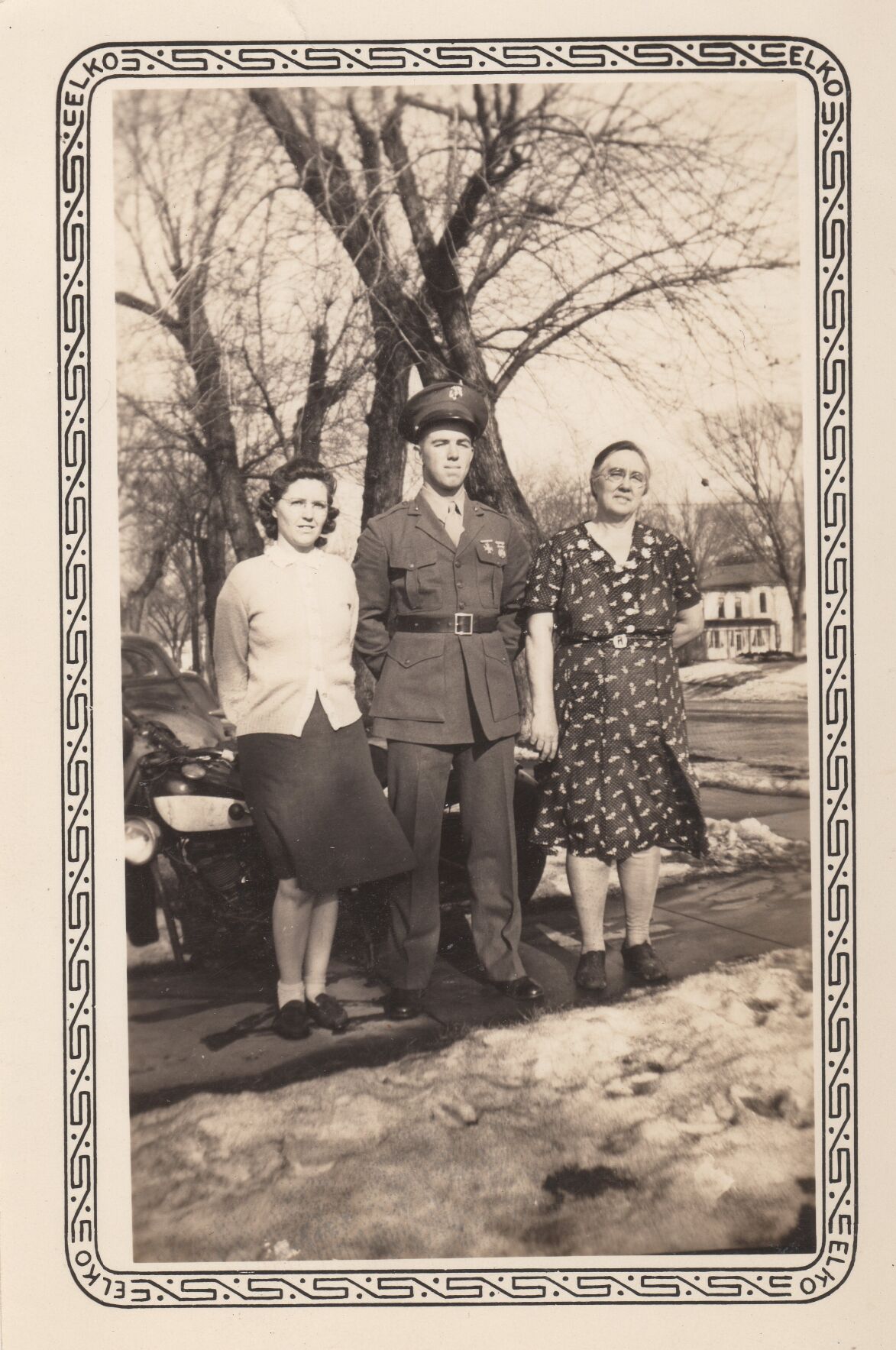 Les Gadbury with his mother while home on leave in 1945. 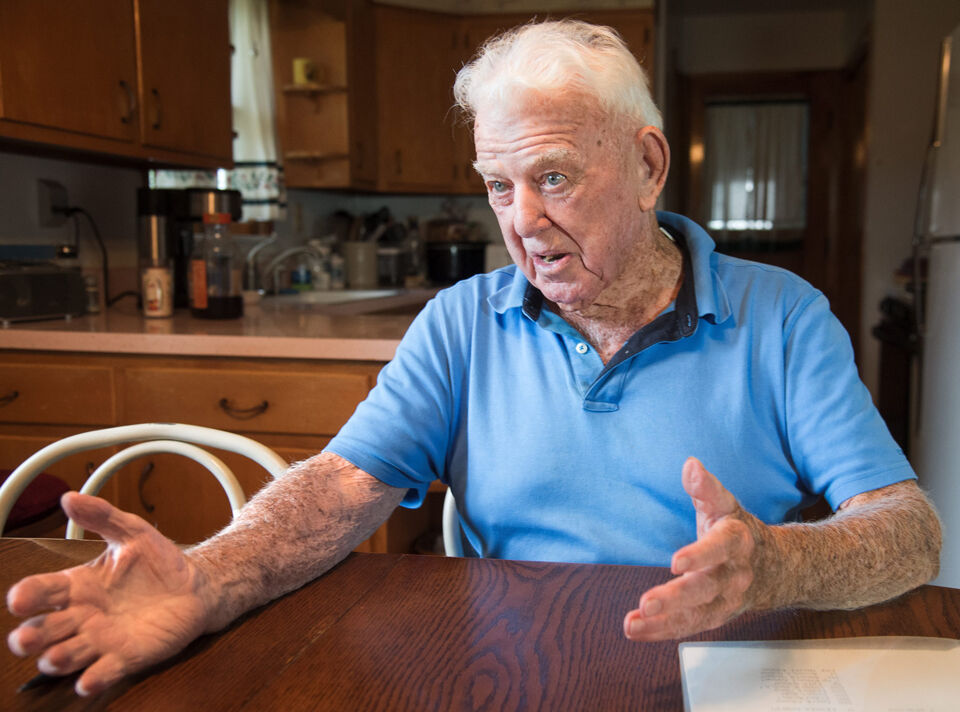 Les Gadbury, a Monticello native, talks to a News-Gazette reporter for a “Those Who Served” story.

Gloria Cardoni, the daughter of the late Les Gadbury, reads a letter that her father wrote home while in the Marines during World War II.

Les Gadbury of Monticello, pictured second from the right in the front row, was one of a select group of Marines to help sculptor Felix de Weldon (back left) craft his original Iwo Jima monument. A model of it appears in this photo.

A portion of a letter Les Gadbury sent home after helping unveil the original Iwo Jima statue in Washington, D.C.

Les Gadbury with his mother while home on leave in 1945.

Les Gadbury, a Monticello native, talks to a News-Gazette reporter for a “Those Who Served” story.

The Iwo Jima flag-raising sculpture in Arlington, Virgina – a key part of the U.S. Marine Corps War Memorial – may be one of the most recognizable pieces of artwork in the history of the nation.

What many do not know is that there was a smaller, earlier version of the well-known pose that was on display in Washington, D.C. for about three years prior to the current, 32-foot high version.

And Monticello Marine James Leslie ‘Les’ Gadbury was in the middle of its making.

“Dad helped unveil it. That’s what is so cool!” said Gloria Cardoni of Monticello, the daughter of Les, who passed away earlier this year.

But at least he got to know the fate of that forgotten statue, found by an author and fellow veteran in 1990.

It’s a long and winding story of how Rodney Hilton Brown became friends with Iwo Jima sculptor Felix de Weldon, which led to him finding the original 1945 bronze in pieces in 1990, restored and put it on display in a military museum, only to be put back in storage – kind of like a popular Indiana Jones movie ending.

“It was a mystery. It was like Raiders of the Lost Ark,” said Cardoni. De Weldon finished the first statue in short order in order for it to be unveiled at the Marine Corps anniversary in November of 1945. He also sculpted the more well-known one still on display at Arlington, which was finished in 1954.

Brown was already researching a book on Iwo Jima monuments when its sculptor told him his first incarnation – about 12.5 feet in height without the flagpole – was probably at his former studio on Washington, D.C. The military had not paid for it, so the artist used his own money and a G.I. loan to construct it. So, when the statue needed to be moved off of its location in front of the Department of the Navy in 1947 to make way for construction of the Pan American Union, it was de Weldon’s to take.

Forty-plus years later, when Brown arrived at the de Weldon's former Randolph Street studio – which had been abandoned and had broken windows and rotting floors – the statue was not in the best of shapes.

“I got down to the studio, and saw this big thing with a tarp on it,” said Brown, adding the statue had been stored outside. “It had been smashed by trees, but it was still there.”

The helmets of the depicted soldiers had holes in them, and the statue needed to be pulled from the mud, but the author – a Navy veteran and official friend of the Marines – will never forget his feeling of discovery and triumph on that day.

But his story was just beginning. The statue needed work, and lots of it. Brown needed money, and even sold a Stradivarius violin he owned to help fund the restoration for the piece, which weighs about five tons.

He also bought a smaller, four foot version of the artwork from de Weldon, one he found beneath collapsed floorboards in that D.C. studio. A leaky roof had caused the collapse.

“It had fallen through the floorboards and settled in the mud,” said Brown

De Weldon helped artists get the restoration right, and Brown ended up unveiling the like-new statue on the deck of the U.S.S. Intrepid in 1995, where it stayed aboard the Intrepid Air Space Museum for the next 11 years.

“There were tears rolling down a lot of faces when it was revealed,” said the author.

After that run ended, Brown was forced to put it in storage.

“And it’s in a box that looks just like the box that the ark is in in the last scene of the Indiana Jones movie,” chuckled Brown.

So the depiction – the Iwo Jima original – is once again out of sight. Forgotten by most, but not by the Gadbury family, who are grateful it was located.

Cardoni took the query seriously, searching online for clues to where the statue ended up. One day it bore fruit with an article about Brown and his restoration work.

“This man discovered dad’s statue. No one knew where it was. It had been thrown away.”

Cardoni has also spent considerable time cataloguing her father’s letters home from his time in the military, which were faithfully saved by his mother, Velma Gadbury Blacker.

They’re gems, telling of his time overseas, of missing Monticello, and of course, the day he was honored to help unveil the original Iwo Jima statue.

“I know my knees were knocking, but it was mostly from the cold, and I may have been a little scared too,” Les Gadbury wrote in correspondence to his mother after the statue was unveiled.

He also reported that, despite all of their efforts, a portion of the cloth covering the statue got stuck on one of the statue’s rifles, necessitating a ladder to get it off.

Gadbury also noted that his high-profile role with the unveiling gave its way to a more subservient role as a guard at an officers dinner after the event.

“We had to help park the cars, and hold umbrellas for all the big shots’ wives, for it was raining,” he said.

“What a miserable evening that was, for we were out there seven hours ‘til the last car left,” he added in the letter home.

Cardoni said Gadbury was anxious to get back to his home town, which he accomplished in January of 1946, later becoming a longtime teacher and coach in the Atwood and Monticello school districts.

Brown’s obsession continued after he funded the Marine statue’s restoration. When de Weldon fell on hard times, Brown bought some of the artist’s tools that created the statue at a bankruptcy auction.

“It’s like having an Michelangelo, and also having his brushes and palettes,” he commented.

At 78 years old, Brown no longer has dreams of traveling with the statue. At this point, he has enough invested that he needs to sell it.

“I’ve been trying to find a home for it for years now,” said Brown. “But I’ve invested a lot of money into buying it and restoring it, so I wish I had some hotels to go along with my middle name so I can give it to some museum for free. So I can’t afford to give it away.”

Cardoni has her own idea where it should end up.

“I think Monticello should buy it,” she said, partially in jest, but just partially.

Brown’s book, “Iwo Jima Monuments: The Untold Story,” was published in 2019, and is available on Amazon and other major retailers.