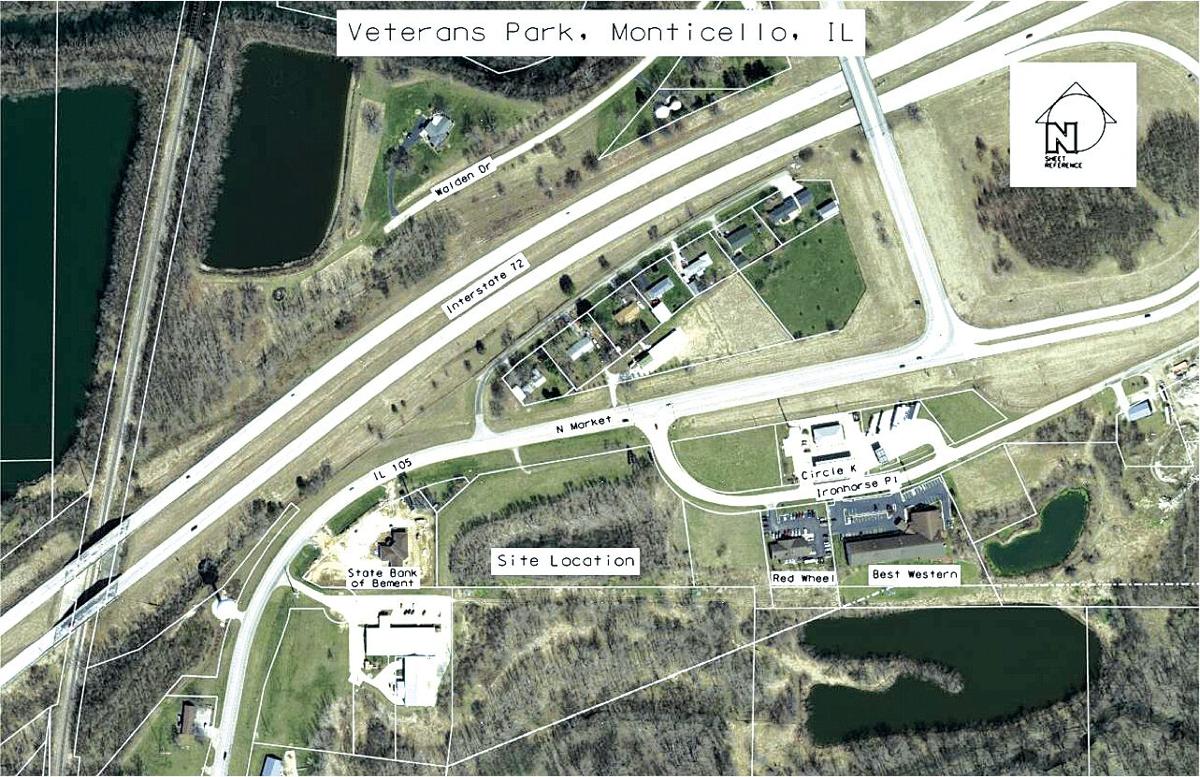 A proposed park to honor veterans in Monticello could be constructed between the State Bank of Bement and Iron Horse Place.

A rough rendering of what a proposed Veterans Park would look like from Illinois 105. City leaders hope the centerpiece will be the original Iwo Jima flag-raising monument that was on display from 1945-58 in Washington, D.C.

A proposed park to honor veterans in Monticello could be constructed between the State Bank of Bement and Iron Horse Place.

A rough rendering of what a proposed Veterans Park would look like from Illinois 105. City leaders hope the centerpiece will be the original Iwo Jima flag-raising monument that was on display from 1945-58 in Washington, D.C.

City hopes original Iwo Jima monument will be on display

MONTICELLO – In a Journal-Republican article last year, Gloria Cardoni threw out the idea that Monticello should acquire the original, iconic Iwo Jima flag-raising monument that her dad, the late Les Gadbury helped construct in 1945.

“I thought it was a long shot,” she admitted.

But now it could become a reality, as the city is proposing a Veterans Park on land it owns on the north end of town near the I-72 interchange.

The park centerpiece could be the 12.5-foot-high (without the flag pole) Iwo Jima bronze that was sculpted by Felix de Weldon and displayed in Washington, D.C.. It was there for about three years prior to being replaced by a larger version that people can still view in the nation’s capitol.

City of Monticello officials have been in contact with the current owner of the monument, Rodney Hilton Brown, hoping they could eventually end up with ownership or permission to display the monument locally.

“We’re envisioning this as a respectful honoring of past, present and future men and women serving the country, protecting our freedoms,” Monticello City Administrator Terry Summers said in describing the idea behind Veterans Park.

Gadbury, a Monticello native, served as a Marine in World War II and after arriving stateside was assigned to help de Weldon get his statue completed by the Marine Corps anniversary in November of 1945. One of his main tasks was construction of the concrete base for the monument.

As a reward, he held the ropes that officially unveiled the statue.

Decades later, after being located and restored by Brown, the bronze work was on display once again for a time, but now sits in storage.

Local leaders hope it’s next chapter is in Monticello.

While the idea is still tentative at this point, the city has drafted a preliminary plan for the new park, which would be located along Route 105 between the State Bank of Bement and Iron Horse Drive. The 5.7-acre lot has been difficult to develop because about two-thirds of it is made up of timber and a large depression.

But what is left at the front is a wide, narrow spot that would be perfect to honor veterans, according to Summers.

Plans call for a brick wall, an elevated platform for the Iwo Jima monument, possible fund-raising brick pavers, and a walking trail.

Work done by the Monticello Area Military Service Recognition group, which maintains active service member plaques at four entries into town, could also get a new home at the park.

City Community Development Director Callie Jo McFarland said passersby can only catch glimpses of the plaques at this point, and feels there would be more engagement at Veterans Park.

“It would be nice to have a place where you could walk around, you could actually take a picture with mom and son or whomever, without being worried about whether your car is going to get hit,” McFarland said.

“The Piatt County Veterans of Foreign Wars Post 5346 is proud to support the proposed Veterans Park in Monticello,” Floyd said.

“Monticello has a very rich history of veterans and the Monticello community is tremendously supportive of its veterans and veterans organizations. This would be a very visible and lasting symbol of that unwavering support honoring both those who have served and those who are currently serving.”

Cardoni trusts the community to do it right.

“Monticello is full of good working Americans who love their veterans, and they would take such good care of it. It would be a wonderful piece of history for honoring all veterans,” Cardoni said.

McFarland also feels it would be a “really grand entrance to our community,” and be visible to those on their way to other area attractions, such as Allerton Park & Retreat Center, the Monticello Railway Museum and Eli Field.

After getting the go-ahead by the city council to pursue the park further, Summers said cost estimates will be obtained and more formal talks will begin with stakeholders, including local veterans organizations.

The Iwo Jima flag-raising sculpture in Arlington, Virgina – a key part of the U.S. Marine Co…