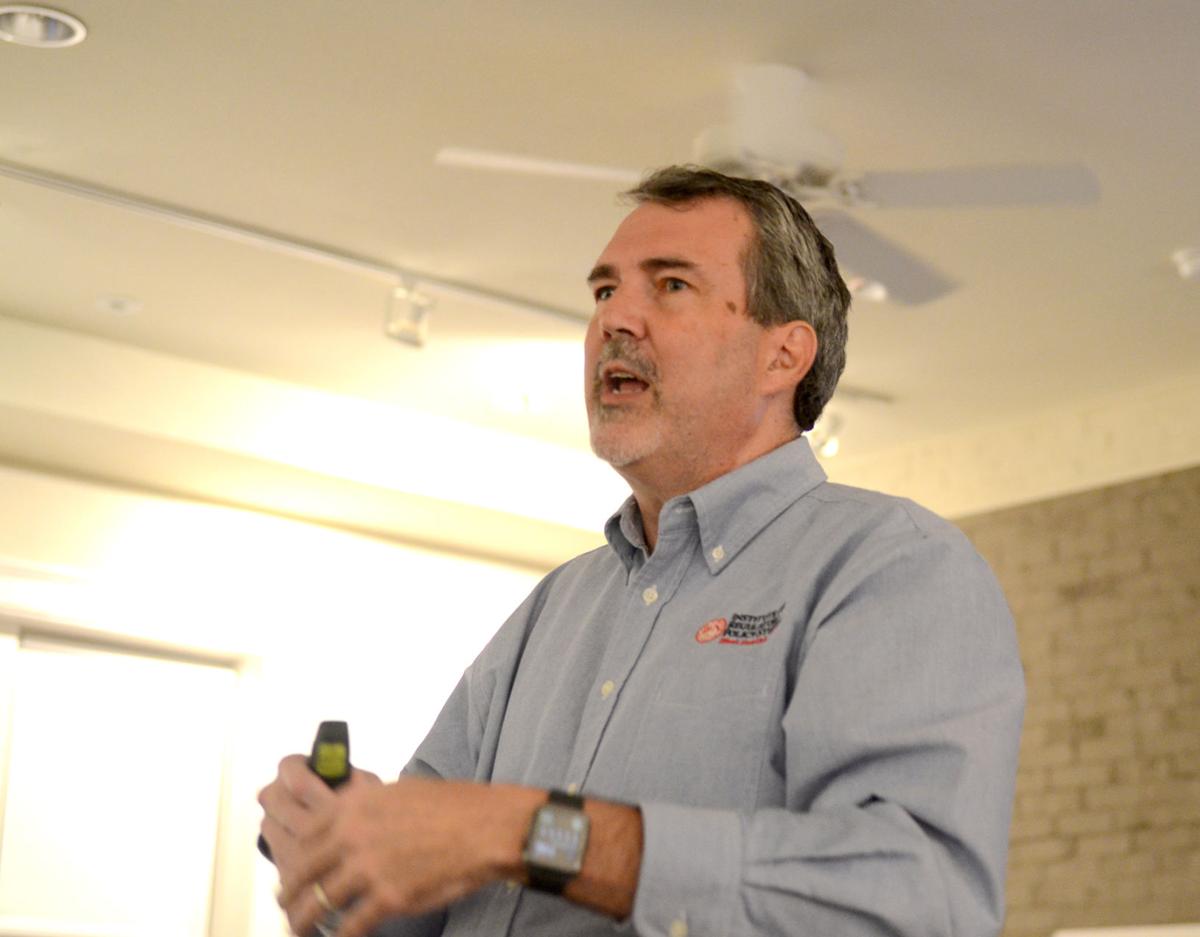 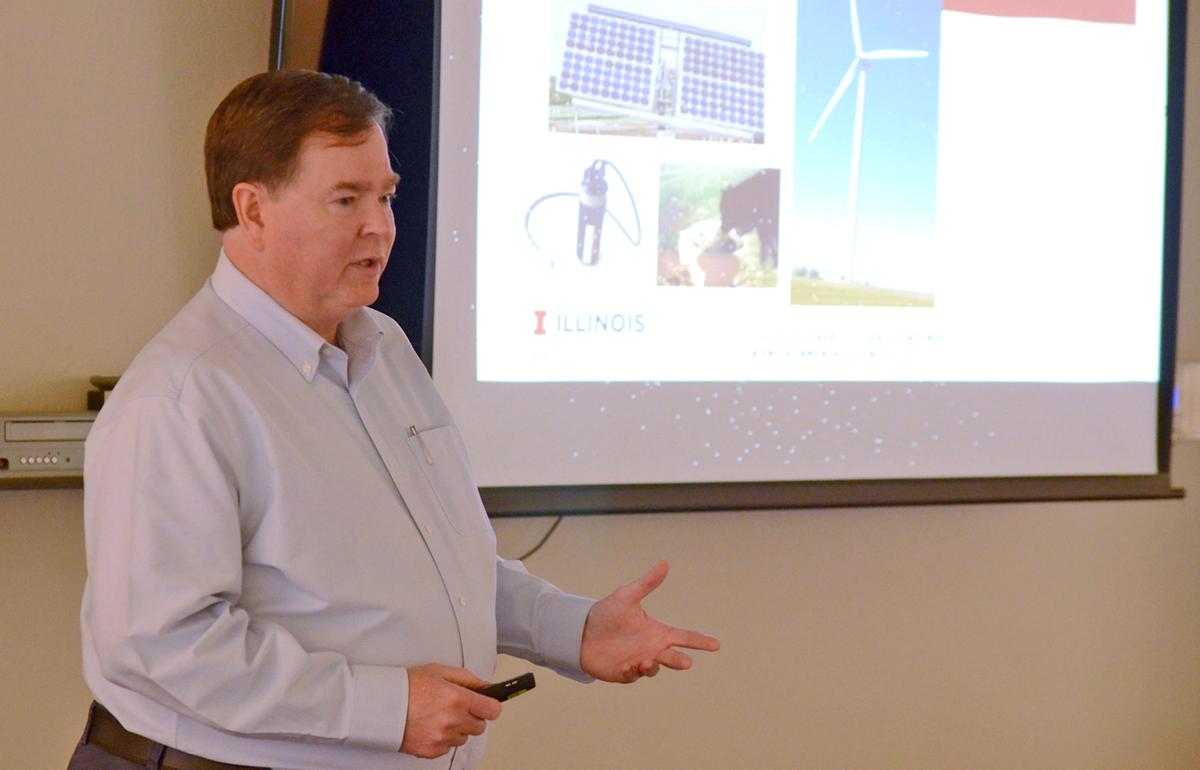 Extension Advisor Jay Solomon gives a presentation on wind energy at the Livingston Center in Monticello on Oct. 7.

Extension Advisor Jay Solomon gives a presentation on wind energy at the Livingston Center in Monticello on Oct. 7.

A pair of researchers say wind energy is an economic boon to rural economies, and that a majority of concerns raised by detractors are being addressed with better technology as more turbines are being manufactured.

That was the thrust of a Wind Farm Q&A sponsored by the Extension office in Monticello on Oct. 7. The 30 who attended seemed keenly interested in Illinois State University Economics Professor David Loomis’ presentation on how windmills affect surrounding property values. He quoted an evaluation done by graduate student Jennifer Hinman of about 300 McLean County sales transactions that took place near the Twin Groves Wind Farm.

That includes locations that were near railroads, land fills, and the like.

A three-stage study – which measured values before wind farm announcement, the time spanning from the permitting to construction, and once the turbines were operational – showed an 11.7 percent drop in values after the announcement, but that it was more than made up for by a similar increase (compared to the before-announcement baseline) once the wind farm started generating electricity.

“Property values actually go up after the wind farm goes into production,” he said.

He felt the study showed the downturn in the middle part of the three-phase study to be generated by homeowners who did not want windmills as neighbors.

“I think of this as kind of a fire sale – ‘oh no there’s a wind farm coming in, let’s sell our property.’ Well, they sold at the bottom of the market, and if you just rode the market out and waited until the wind farm came in, you are better off,” commented Loomis.

About 3,000 transactions throughout McLean were reviewed for comparison as part of the study.

A 2016 report Loomis compiled for the state estimated the economic benefit of wind farms in Illinois over 25 years to be about $6.4 billion, and that it would generate 20,000 jobs, mostly in construction. There would also be an estimated 870 long-term jobs.

“I think it really does revitalize rural economies, it creates jobs, and it is cost effective option,” he said.

Others are not so sure. Speaking to the Piatt County Board on Oct. 9, rural Mansfield resident Gary Kambic felt the concrete and metal used in producing turbines negates some of the clean energy value, saying nuclear energy would be a better long-term option.

He notes that former Microsoft owner Bill Gates had started a new company dedicated to designing a new reactor that uses spent fuel as fuel cells, which would help take care of the old fuel disposal issues.

Apex Clean Energy announced earlier this year the intention to erect up to 120 wind turbines in northern Piatt County to generate about 300 Megawatts in electrical capacity.

Kambic, representing SavePiattCounty.org, also noted problems with bird kills, safety issues when blades break, and changing a landscape he moved to for its farmland view 20 years ago.

At the Wind Energy Q&A, Extension Energy and Enviornmental Stewardship Specialist Jay Solomon, Jr. gave the audience his opinion that most of the issues raised with wind towers are being addressed through research and technological improvements.

He pointed out that turbines are responsible for an estimated 1 in 1,000 bird kills in Illinois, with house cats, communication towers and buildings providing the lions share of avian impact.

“Wind turbines are not as big of a hazard that’s out there. Chicago is one of the biggest hazards,” noted Solomon of the windy city’s skyscrapers.

He also said turbines can affect radar, but only if placed improperly.

“There are places you don’t put a wind turbine, i.e. right beside radar, but those problems are rare and easily avoided,” said the Freeport-based educator.

As for noise, he said modern wind turbines generate about 50 decibels at 1,000 feet away, less than most offices.

He admitted turbines are getting slower and larger at the same time, the former to alleviate flicker and the latter due to basic physics. Doubling the diameter of the blades triples the energy output, so “you can double the power without doubling the size.” That means they can turn at nine rotations per minute and still generate significant power.

Ice throw has also been mentioned as a concern, but Solomon said most of the ice falls straight down when it is generated in cold months.

Loomis said trends in the wind energy were for larger and taller turbines, developers expanding out of the midwest and south because lighter winds can now generate power, and that the closing of coal plants is freeing up transmission line capacity that can be used by other energy sources.

Macon, Piatt and DeWitt County Extension Director Doug Harlan said he organized the Q&A at the request of area land owners, some of whom had been contacted by Apex.

“The information they were getting was just from the energy company. They were just wanting to know the economics of it. And most people are concerned about it driving down property values,” said Harlan, who felt the issue served its purpose.

“The goal was to provide some research-based information to the public about wind farms,” he said. “I thought it provided people the information they wanted to know.”

He also noted his office in Decatur is powered by a wind turbine located at Richland Community College.

“It powers my building. They told me when they built it it was a 20-year life with maintenance. The with maintenance is kind of key, because they do require maintenance,” said Harlan, noting that bearings needed to be replaced 10 years into its life.

Board hears from wind power dissenter