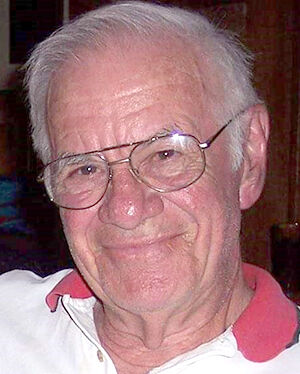 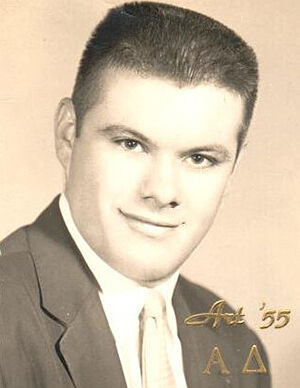 Arthur George “Art” Finet, 88 of Monticello, IL passed from this life on December 27th, 2021, due to complications related to Alzheimer’s disease. He was born on September 20th, 1933, at St. Elizabeth Hospital in Danville, IL, the son of Adhemar Florimond Marius and Leona Irene (Williamson) Finet, brother of Geraldine (Geri) Willard and Carole Toth.

Art attended Edison Grade School in Westville and Westville High School where he was involved in numerous clubs including the Booster club, Boys League, Science and Biology clubs, Drama, Debate, newspaper, and yearbook. Art also played football in his senior year, joining the “W” club for sports, and the Owl group for academics. After graduating he attended General Motors Institute in Flint, Michigan (now Kettering University) where he earned a degree in Industrial Engineering in 1956 and was a member of the Alpha Delta fraternity.

Art is survived by the love of his life, Edwina Scott (Green) Finet. They married on September 24th, 1955, at the Asbury Methodist Church, in Flint, Michigan. He is also survived by his loving children: Dayna Finet of Austin, TX; Arthur Scott Finet of Herndon, VA; Brian (Kelly) Finet of Monticello, IL; and David (Marya Sosulski) Finet of Detroit, MI, as well as his sister Geraldine (Geri) Willard of Westville, IL. He is also survived by 8 grandchildren and 6 great-grandchildren. He was preceded in death by his parents, his daughter Andrea Renee Finet, and his sister Carole Toth.

Art enjoyed many hobbies and activities including family vacations, gardening, woodworking, stained glass, sailing, playing golf with friends, attending elder hostels with Edwina and his grandchildren, getting together with friends, and genealogy. Art built grandfather clocks for each of his children as a gift for their weddings, and his interest in genealogy led him to document his life story for his family members in his later years. He also dedicated his time in service to others throughout his life. He served on the Westville School Board, was president of Junior Chamber of Commerce for the Jaycees in Westville, donated blood regularly for years, and attended both the United Church of Christ in Westville and Christ Lutheran Church in Monticello where he became involved in Faith in Action and Meals on Wheels.

Art was quick-witted and always had a joke or quip at the ready. He reveled in the accomplishments of his family and worked diligently throughout his life to provide each of his children the opportunity to achieve their dreams. He also enjoyed visits with all of his grandchildren and great-grandchildren. Art would tell people how fortunate he had been in life and friends and family who loved him were fortunate to have known him, as he enriched each of the lives he touched. His was an example of a life well-lived.

Due to COVID concerns a private family burial will be held at this time with a Memorial service to be scheduled in the spring.

In lieu of flowers, the family encourages donations to the Alzheimer’s Foundation, Faith in Action, or Christ Lutheran Church. Condolences may be sent to the family at www.mackey-wrightfuneralhome.com.