Skip to main content
You are the owner of this article.
Edit Article Add New Article
You have permission to edit this article.
Edit
Home
News
Sports
A & E
Business
Obituaries
Multimedia
Announcements
Classifieds
1 of 2 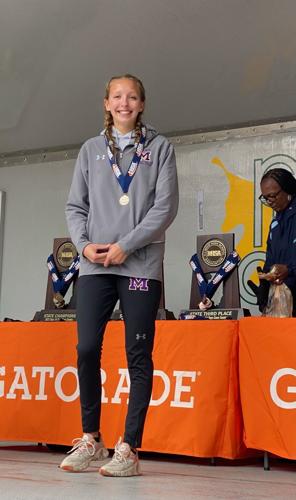 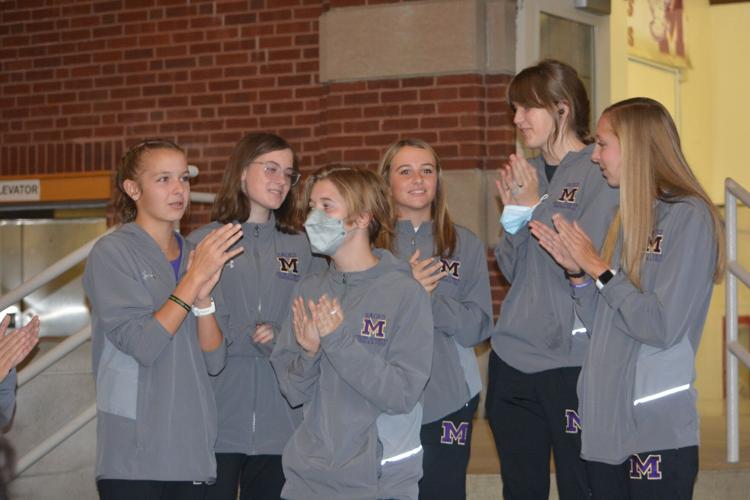 Members of the Monticello Girls’ Cross Country Team were the guests of honor at a special assembly at Monticello High School Friday morning. After singing the school song, the girls left for the state championships at Peoria where a day later, senior Mabry Bruhn, (far right) won the state individual title. Other members of the team include Estella Miller, Mabry’s freshman sister, Mylin, and freshmen Eliana Ely and Olivia Gerdes; Mesplay, who is also a senior; Estella’s sophomore sister Sylivia and junior Josephine Walker.

Members of the Monticello Girls’ Cross Country Team were the guests of honor at a special assembly at Monticello High School Friday morning. After singing the school song, the girls left for the state championships at Peoria where a day later, senior Mabry Bruhn, (far right) won the state individual title. Other members of the team include Estella Miller, Mabry’s freshman sister, Mylin, and freshmen Eliana Ely and Olivia Gerdes; Mesplay, who is also a senior; Estella’s sophomore sister Sylivia and junior Josephine Walker.

PEORIA – The runner’s high has long been an elusive experience that some long-distance runners know well and others, not so much. It is a brief, deeply relaxing state of euphoria, a sense of extreme joy or delight.

Monticello senior Mabry Bruhn has felt it, but not often.

“Running is one of the hardest things I have ever done but I chase that ‘runner’s high’ and use it as a motivator because it feels so great when it happens,” she said.

She found it on Saturday moments after winning the Class 1A girls’ cross country state race at Detweiller Park in Peoria.

“I absolutely felt it,” she said. “It was amazing.”

On Saturday, she also used other ways to motivate herself to first place.

The Detweiller Park course layout is such that those finishing their 3-mile run will see other athletes reaching the 2-mile mark, traveling in the opposite direction.

Thus, a fun opportunity presented itself to Bruhn.

Though the Monticello senior admittedly was focused upon something else.

“I could hear the noise surrounding me,” Bruhn said. “I had about 150 (meters) left, and one of my teammates, Katie (Mesplay), was going into her last lap. And she was cheering me on as I passed her. We got a picture of it.”

Saturday was filled with big-time photo opportunities for Bruhn.

Including several that display her as the Class 1A individual state champion.

Bruhn used a strong second mile to pull away from the field, then battled through deteriorating weather conditions to win the small-school girls’ race in a time of 17 minutes, 8.43 seconds.

“I’m thrilled. I’m just so excited,” Bruhn said. “It’s always been something I’ve wanted to accomplish. I just never said it out loud to myself or anyone else. Being able to go out and do it senior year is just amazing.”

Bruhn entered the race subscribing to a specific theory for how she might be able to give Monticello its second-ever cross-country individual state championship — its first since Steve Schroeder won the 2011 1A boys’ meet.

“My plan was to keep the girls in front of me on a tight leash for the first mile,” Bruhn said. “I knew there was going to be a pack out in front of me that’d start fast.”

Bruhn made her move in the middle mile. She led the nearest foe at the 2-mile mark by approximately 12 seconds.

She did just that, though not without a challenge from above.

“It was a little wet in the beginning. When we had about a mile left, it started raining (again),” Bruhn said. “In my last 600 (meters), it was a straight downpour and I couldn’t see a foot in front of me.”

“I was exhausted,” Bruhn said. “I don’t think it really sunk in until the awards ceremony, when they announced me. And I was like, ‘Oh, I really did that.’

Bruhn said she didn’t see her season ending with a state title. Monticello placed 15th as a team with 424 points, pairing Bruhn’s outing with an 89th-place time from senior Estella Miller (19:52.07).

“At the beginning of the year, we didn’t know if we were going to be able to make it to state or not,” Bruhn said. “But to make it as a team is a great achievement and we are so happy and proud.”

“I’m really proud of how far we have come,” Estella Miller said. “As seniors, we have qualified every year and got second at state our freshman year, so this means a lot.”

The team is coached by Dave Remmert.

“We are a very small team, but we are mighty,” he said. “We only have eight runners but to compete at state is a big victory for us and I am very proud of these girls.”

He also had high praise for Mabry.

“She is the shining light for our team,” he said. “”We have rarely been in a position to have a chance to have individual honors and that means a lot to our team and our school.”

Last year, Bruhn finished ninth to help her squad to a sixth-place finish at the state meet.

Bruhn made up half of an Illini Prairie Conference sweep in Saturday’s 1A girls’ state meet.

The Rockets earned last year’s crown by just 12 points ahead of Winnebago.