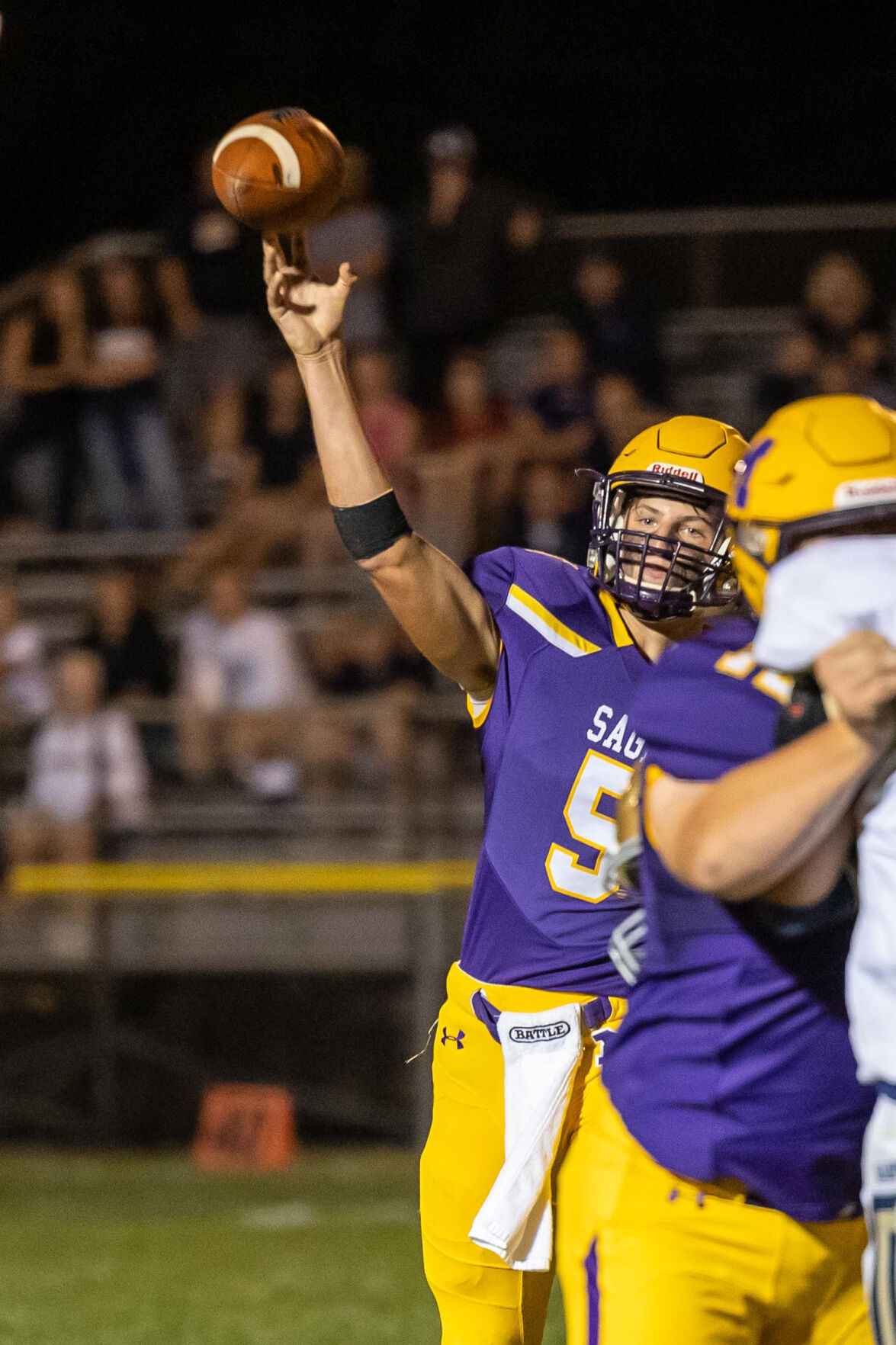 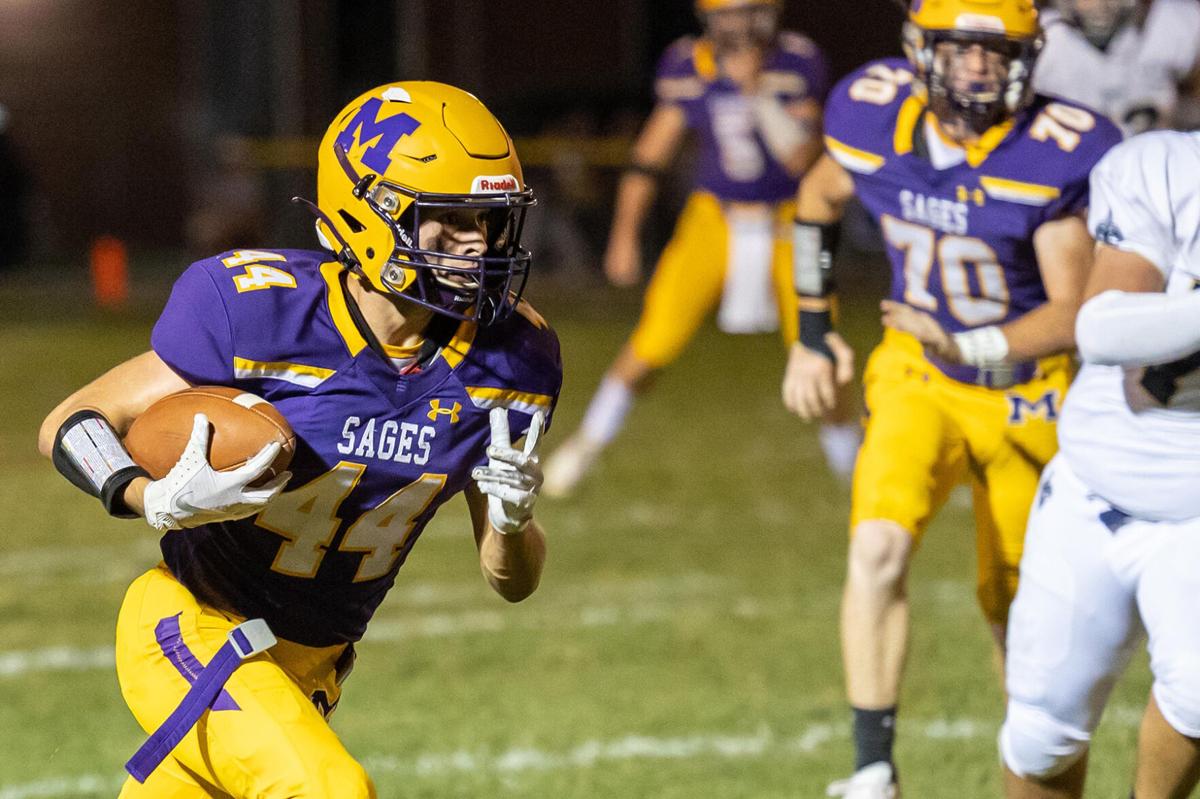 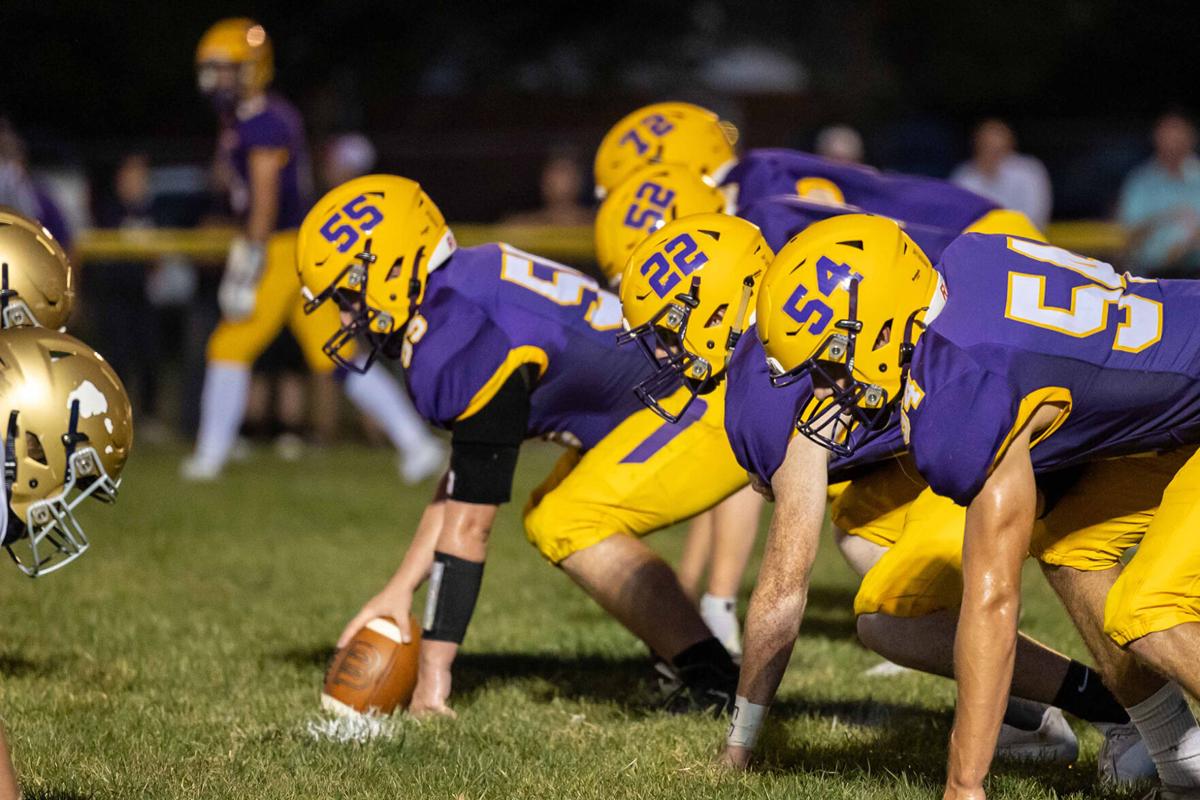 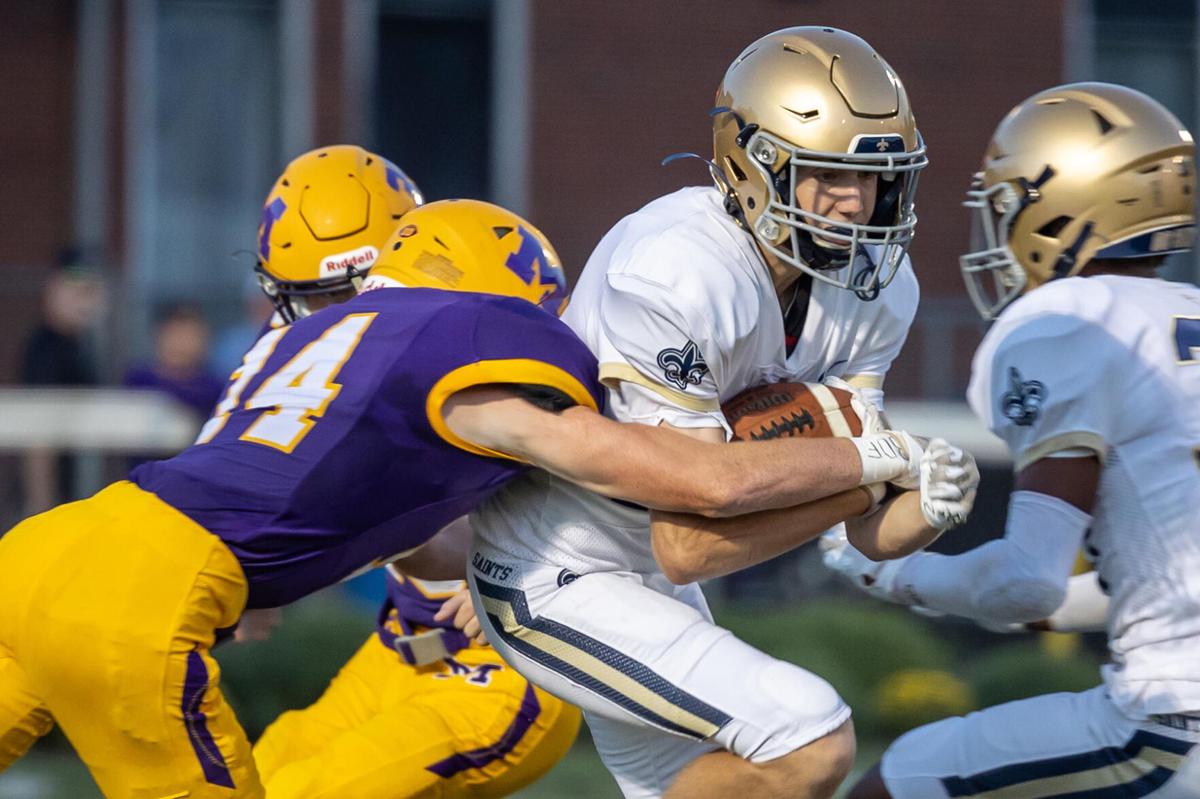 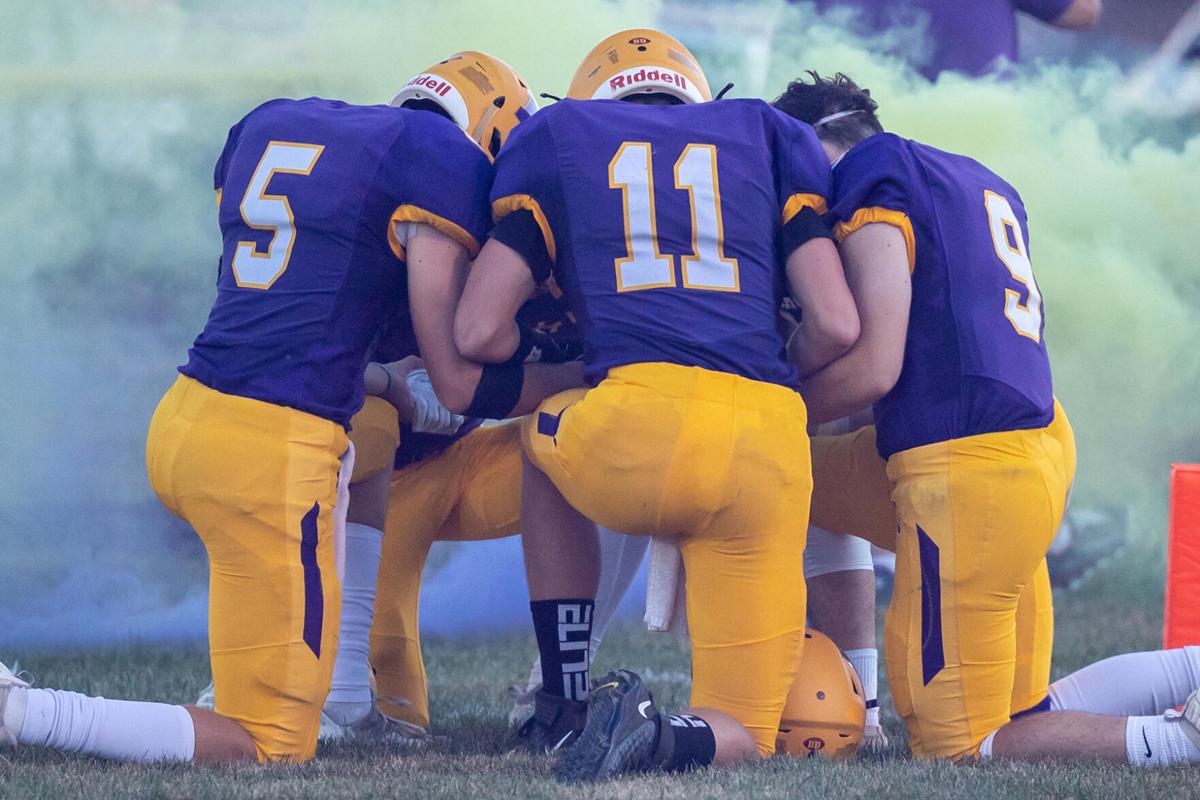 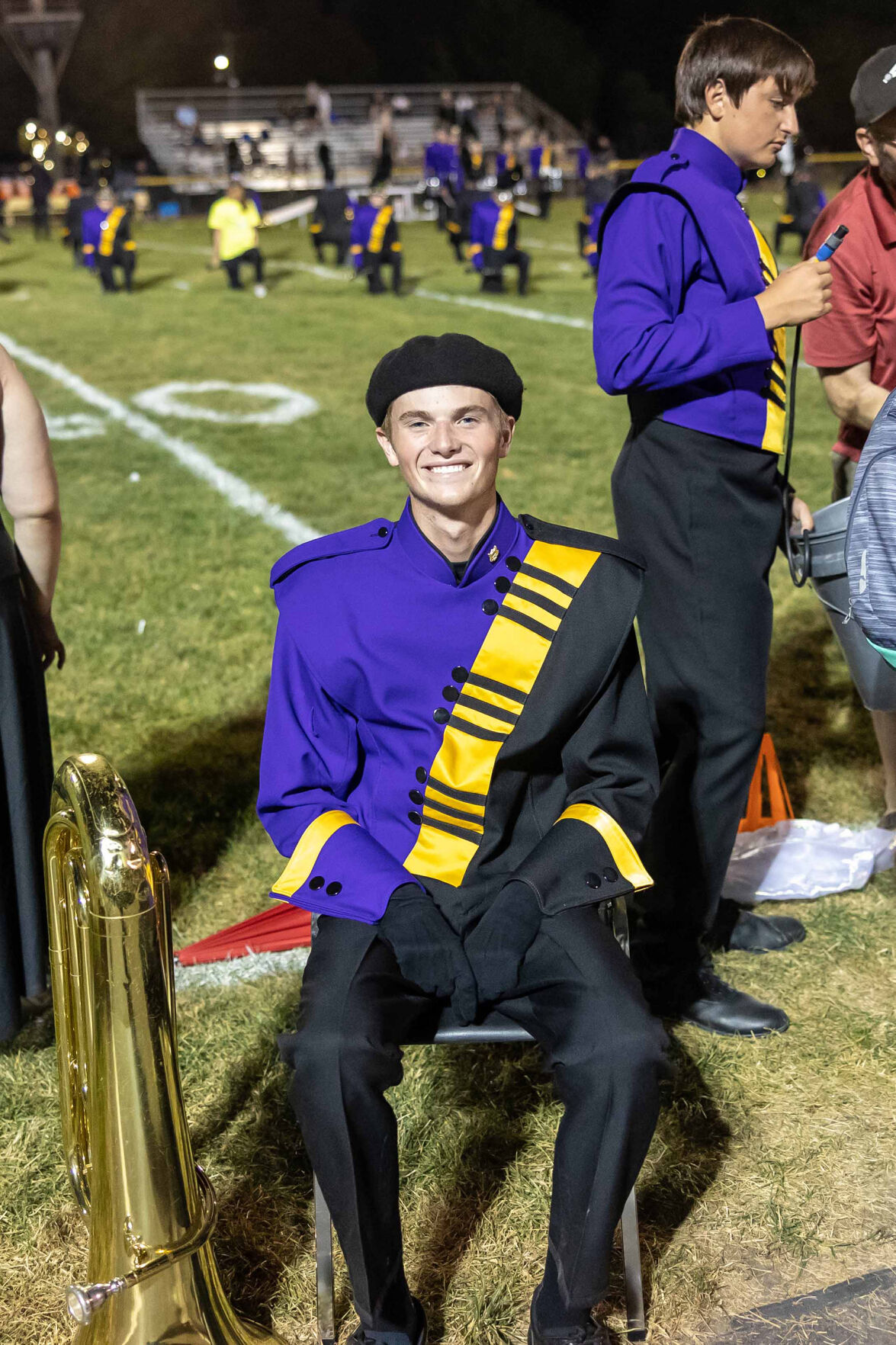 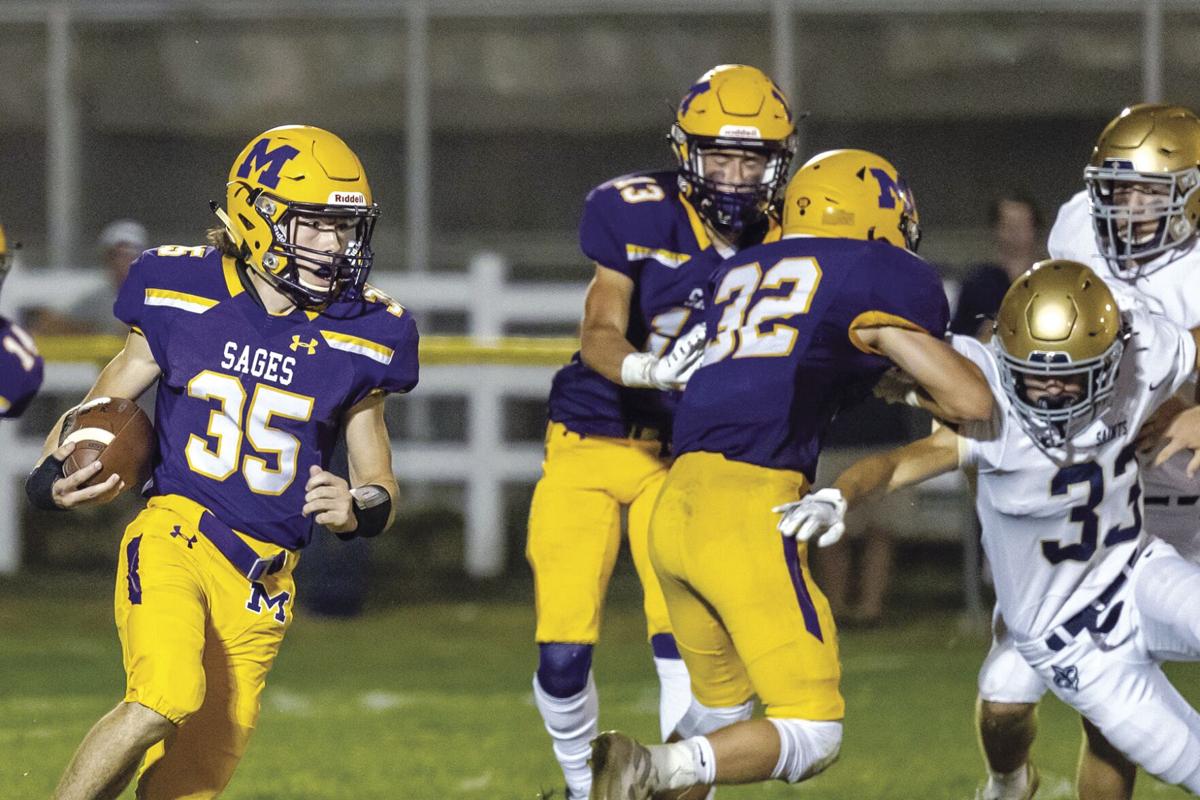 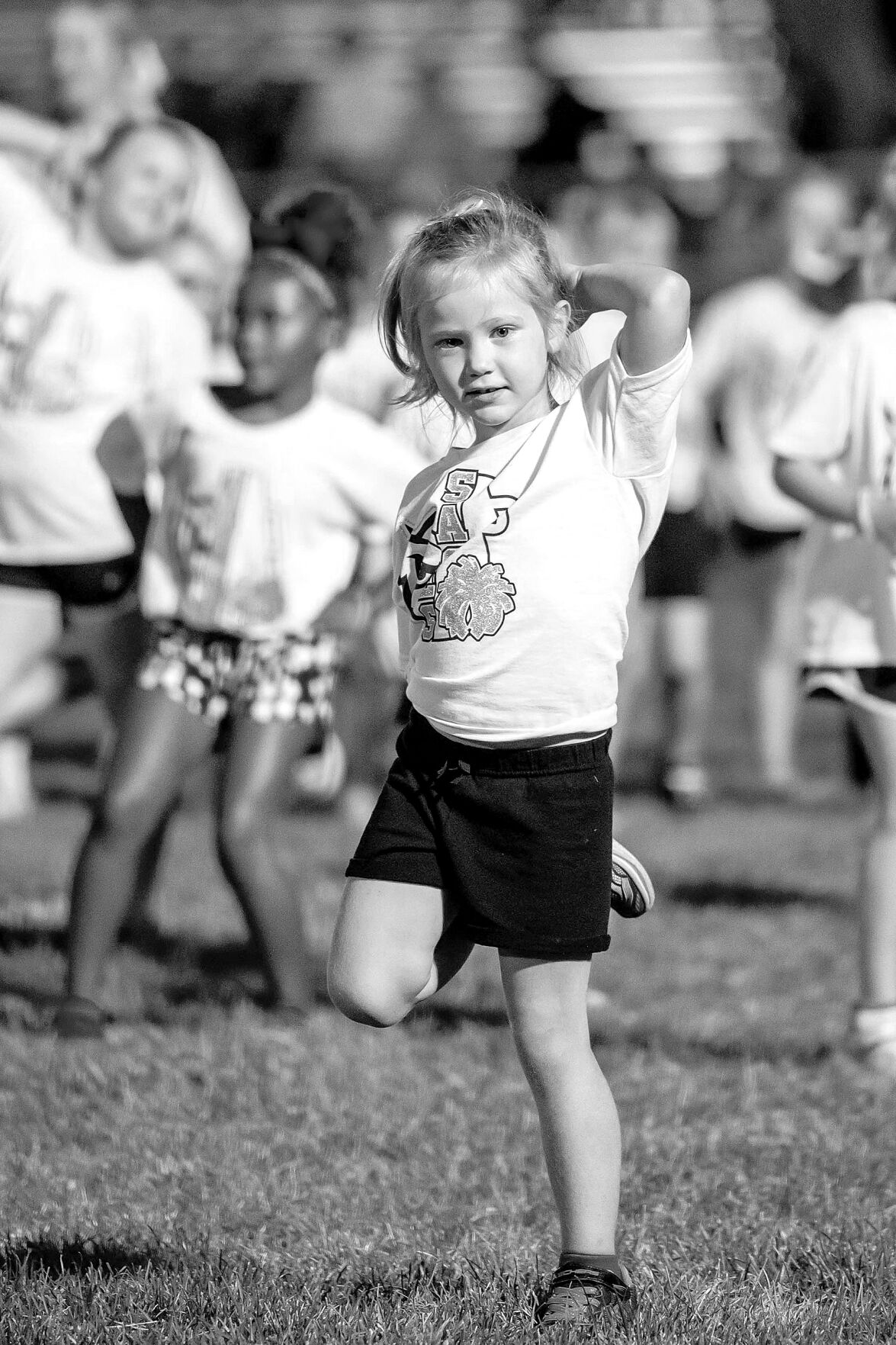 MONTICELLO — In a game of twists and turns and a reversed call from officials, Monticello High School’s football squad beat Bloomington Central Catholic 33-27 Friday in a battle of unbeatens at home.

The Sages are now 4-0 on the season, one of just two undefeated teams remaining in the Illini Prairie Conference. Those two — MHS and Unity — meet in the final contest of the regular season in Monticello.

With less than four minutes remaining and trailing 27-26, Sages quarterback Joey Sprinkle connected with Triston Foran from eight yards out in a pass that was highly contested by Foran and Saints defender Joey Slaughter.

Both thought they had made the catch, with officials originally ruling it incomplete. But under the dual possession rule where the tie goes to the offense, it was eventually ruled a catch and a touchdown, giving Monticello a five-point lead and an eventual 32-27 win.

“We both had it for a while, and we were wrestling with it and finally I came away with the ball,” Foran said. “(Slaughter) ripped it away after I was down. … Then, after they got another angle, they realized I had possession and I was in.”

It was an appropriate ending to a classic Friday night battle that saw BCC go up 10-0 early, but then featured a tight contest with five lead changes.

“That’s the type of game you want to be a part of: Win or lose, you want to be part of those games. It’s better to win, and we did, so I’m very happy,” Monticello coach Cully Welter said.

“That’s nerve-wracking, and I lost it a few times (chuckles), but we just want these kids to be successful.”

The Sages once again got off to a slow start, including a key penalty in its opening drive that allowed BCC to get the ball back and go ahead 10-0 in the first frame.

Monticello got on the board with 9:04 left in the second quarter when quarterback Joey Sprinkle led the Sages on an eight-play, 53-yard drive culminating in a one-yard TD toss to Foran.

About four minutes later MHS took its first lead at 12-10 when Sprinkle sprinted in from four yards out for a rushing touchdown.

BCC stormed back on its next drive to score and added a two-point conversion to recapture the lead, 18-12.

Not to be outdone, the Sage offense continued to click, getting four straight first downs before Sprinkle connected with tailback Jacob Tackett with 1:06 left in the quarter for an eight-year score, good for a 19-18 halftime lead.

Welter was not surprised at the spine-tingling battle that took place, calling the Saints an improved squad that gave the Sages their best competition of the season thus far.

“They’ve improved a ton,” he said.

Monticello then took advantage of a Peyton Scott interception to drive 47 yards and score on an 18-yard, with Scott taking it to the end zone.

But the Saints weren’t done. With about eight minutes left, they scored on a two-yard run and converted the extra point to go up 27-26. That came after BCC had scored two points on a blocked punt that led to a safety.

That set up the drama of the last minutes with the contested touchdown pass, a sack by Blake McDuffie that forced a BCC punt, and a third-down scramble by Sprinkle that gave the Sages a first down and put the game away.

Welter said the sack was huge.

Sprinkle led the MHS offense by completing 16 of 26 passes for 211 yards and four touchdowns.

Foran caught eight of those passes for 91 yards and two scores.

Even with the undefeated start and 10 straight wins that include an undefeated spring season, Monticello has more in the tank, said Welter.

“I feel like we can do even better. We didn’t get off the field on third down defensively all night long,” he said.

That included the Saints converting five third downs — including a third and 11 shortly before scoring a touchdown — on their initial drive.

“Offensively, we had spurts,” added Welter, who felt like “I didn’t call a good game down the stretch.

“So I think between all of us, we could be a lot better. It’s a nice win, but we could get better.”

Sprinkle also led the team in rushing with 61 yards on 15 carries, while Tackett ran for 46 yards on eight carries.

The Sages travel to Pontiac this Friday to continue its Illini Prairie Conference schedule against the Indians. Pontiac took a 48-8 loss to Paxton-Buckley-Loda last week. It’s win was in week three, 20-14 over Rantoul, which is Monticello’s Homecoming night foe on Oct. 1.

(Colin Likas of The News-Gazette contributed to this story).